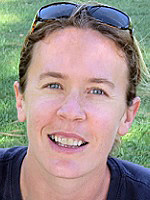 Creating this puzzle was a Herculean effort. It began back in 2013 when I approached Kacey Walker with the question "Want to write a puzzle together?" We met through her husband shortly after I moved to San Diego, and I knew she would be game for trying something difficult. Given her interest in programming and Scrabble, we quickly settled on the theme: present solvers with a Scrabble rack and have them anagram the letters for the theme answers. The twist was that each rack would anagram in multiple ways — exactly 3, in fact — and so the puzzle would be a step up from the famous BOBDOLE/CLINTON puzzle of 1996, where the clue "Lead story in tomorrow's newspaper (!)" had not one, but two answers. We both loved the idea of taking these "Schrödinger puzzles" to the next level.

The challenges in this were immense: finding racks that had exactly three anagrams, making sure all three anagrams were well-known words, avoiding triplets that had three different letters in the same spot (creating a triplet in the crossing that would get but a single clue), figuring out a black-square arrangement that would accommodate all this insanity, filling the crosses and writing clues that didn't feel forced, making sure the grid was clean, and on and on. Our initial effort had four of these Scrabble racks built around a center black square (see right). Can you see the three words in each septet?

This grid was ultimately rejected — words like RSA were too obscure, and a few of the clues were too forced and couldn't be fixed. Getting that rejection was hard. The two of us put in a tremendous amount of time on this version: Kacey wrote a program that searched for the well-known triplets; we argued over which to select; I went through endless drafts of the black square placement; and we spent months trying to fill, clean up, clue, edit, and re-clue the beast. For me, the neatest aspect of the final grid was that it had 81 different possible solutions (how would Will even print the solution?!), depending on what anagram choice a person made for each of the four Scrabble racks.

After the rejection, we decided that using four theme answers was simply too much. It hamstrung the grid in powerful ways, and led to substandard fill. When we moved down to three we had more freedom, and this allowed us to include SCRABBLE and ANAGRAMS as theme answers. It also resulted in a non-standard black-square placement, which I think is fun, especially for long-time solvers who constantly see the same old grids. 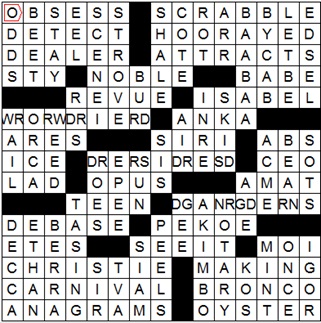 In the final version shown to the left, Kacey was responsible for all the words starting at the central I, moving northeast, then around the corner and to the western edge. I did the other half: from the I to the southwest and then east. The clues were also split — Kacey did the Downs, I did the Acrosses — and we talked about all the clues that had to represent multiple words, like W/RAIL and N/ROTARY.

The rejection of the original version was also fortuitous. Between the creation of the first and second versions, a new version of the Scrabble dictionary was announced. Any new words would be legal in tournament play starting on December 1, 2014. Could we get the new grid constructed in time to celebrate this changing of the lexical guard (yes!)? Were any of our anagram triplets really quadruplets because of the new words (no!!)? Would Will be interested in celebrating the new dictionary with a Scrabble-themed puzzle (yes!!!)?

Kacey and I hope you enjoy this labor of love. It is her first puzzle, and sets a high bar for any future constructions. As for me, I think this is my favorite puzzle of any I have constructed.