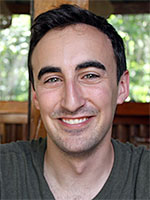 Adam Wagner, originally of Long Island, New York, is a creative lead at Patreon helping creators get paid for their work. In previous lives, Adam has also been a writer for Jimmy Kimmel Live!, a viral YouTuber, a game show champion, and an applied math major at Brown University.

Adam currently lives in Oakland, CA, with his wife, son, and a few thousand honeybees.

This Thursday CROSS THE T'S theme is a companion piece to the following Thursday's DOT THE I'S.

Fun puzzle. This one impressed me.

Today's crossword reminds me of a favorite, not haiku, but poem anyway:

There was a young girl from Japan
Whose limericks never would scan.
When someone asked why
She replied with a sigh,
"It's because I always try to fit as many syllables into the last line as I possibly can."

That girl had an intimate friend
Whose limericks came to an end
Suddenly.

ELOPE and its plural variant we see today have seen a number of outstanding clues over the years:

And my personal favorite: