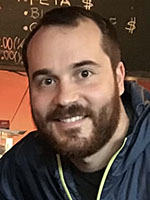 It's been a minute since I've solved a puzzle with so many entries that I hadn't already added onto our XWord Info Word List! I'm usually plus/minus on trendy portmanteaus, but DADVICE is right on. Right on top of REST ON, and GREATEST on top of all that? SO BE IT.

Oh no, HE WENT THERE, said my eye-rolling kids.

My favorites of the debut entries were WIN OR GO HOME and WINE TOUR (my typical wine tour covers roughly twenty feet, since after a half glass I fall asleep on the couch). I debated on HISTORY NERD — are entries like CHEMISTRY BUFF or POLI SCI ESSAYIST more or less valid? — but I decided that I'd be doomed to repeat myself if I forgot about that entry.

Audacious debut, going down to 64 words is a task most experienced constructors shy away from. It's so difficult to achieve both color and cleanliness. However, there wasn't as much DREAR as I expected, even words like LENTEN figure-out-able from etymology. The abbreviations in MTS (mountains) and WBA (World Boxing Association) were fairly crossed, too.

Neat to experience so much new material; well worth a few inelegances here and there.