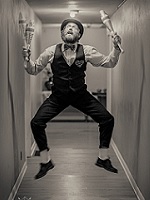 For some themes, there seem to be quite a limited set of themers leading to a rather constrained grid. Not this one! While still feeling really solid, I loved the wide realm of themer options and really really loved the ones I landed on. It was so fun to fill the grid with a little more flexibility than most of my themes. Being able to include ample tasty letters like J and Z was super fun as well! Basically, I'm just stoked on the puzzle over all. I hope you are too!

When I originally submitted this puzzle, I sent in two versions: one with the reveal in the SE and one with the reveal at 1-Across. I could see the fun in both having the vowel hint to help fill out the grid (as would be the case if it was the first clue) and as having it as a more traditional reveal. Will liked the traditional way which suited me just fine. Another interesting twist was how to treat "Y": when is it a vowel and when is it not? I ended up removing all Ys in the rewrite to avoid the confusion (though was really sorry to lose the crossing of "ODE TO JOY" and "YO MAMA JOKE")

This is my second Times puzzle, and while the excitement of the accomplishment is less the second go 'round, it is only ever so slightly less. I've got a frame picked out and a place on my wall already chosen. Here's to running out of wall space before either my brain gives out, or our robot overlords make crossword constructors expendable.

Did you know ANO in Spanish means something very different than AÑO? Like kind of a big deal difference. When I learned that, I realized I'd been entering a dirty word in crossword puzzles for a long time without knowing it. Hence was born the idea for this puzzle: what if a puzzle treated letters with diacritic marks distinctly from the same letter without? What followed was an in depth dive into English words with diacritic marks and what subtleties they carry (like whether the Ä in HÄAGEN DAZS is an umlaut or a diaeresis). The result, my first NYT crossword and a life goal achieved!