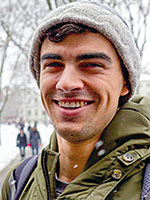 TOM: Ethan and I became friends when we were assigned lab partners in high school chemistry class (thank you, late-alphabet names!). Our luck continued as lab partners in physics senior year and when we got into the same college.

ETHAN: After graduation in 2020, I constructed a mini-crossword for Harvard's version of Class Notes ("The Red Book"), where I mentioned that I hoped to have a puzzle in the Times one day.

TOM: I solved Ethan's puzzle and asked him if he wanted to collaborate — very happy he said yes!

ETHAN: As a solver, my favorite themes involve simple words parsed in surprising ways, so after realizing that BOXER could be a command, I was ecstatic. We started brainstorming themers around the holidays when stacks of FERRERO ROCHER chocolates were lying around my house. I noticed that ER appeared three times, and I told Tom we had struck gold.

TOM: ROGER FEDERER is probably our favorite theme entry. Ethan and I are both tennis fans, but when we constructed this puzzle, we had no idea he would be retiring so soon. We hope the puzzle can also be a small tribute to him!

Last week, my father told me that one of his first memories of crosswords was identifying the word OBOE in a Sunday Times puzzle that his mother was solving, an early moment in their lifelong bond over puzzles. My earliest puzzling memory is seeing them solve together (or better put, compete with each other) on Saturday mornings. Although crosswords have long been in my consciousness, I did not start solving on my own until January 2020, the same month my grandmother passed away. The itch to construct came quickly after beginning to solve, and this puzzle was born a few months later. I wish I could share it with her.

I could not be happier to be making my debut with this puzzle. STOP DROP AND ROLL is one of those fun, familiar phrases from elementary school that still rattles around in my head for some reason, and it clicked to me that it could make a fun revealer that links three unrelated things. The dopamine rush from recognizing a connection like this is one of the things that got me hooked on solving, so it is fulfilling to debut with a puzzle centered around that element. I am also happy to inject a lot of my personality into today's grid, from basketball and dessert to geography and transit.

Many thanks to the Times editorial team for helping me improve this puzzle immensely from its first version. Most importantly, thanks to my friends and family, who have supported me at every turn! I hope you enjoyed it!