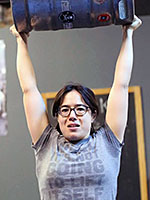 I'm known for my love of the very hardest crosswords: I had a very long streak in which about 10% of my Twitter feed was me complaining about how the Friday and Saturday NYT themelesses were too easy, and my website is ToughAsNails.net. Although hard puzzles are my favorite to solve, I do enjoy making a nice easy one from time to time. I find that my sweet spots are either simple, straightforward themes that lead to a Monday or Tuesday grid, or else hard themelesses where the trickery is in the clues. One of these days I will figure out how to make something moderately hard for Wednesday or Thursday!

Since I often start themelesses now with a single seed (in this case, BOX BRAIDS) instead of two or three, I'm really pleased that the editing of this puzzle left much of the "me" in the clues intact, since you can't necessarily tell that this puzzle is a Stella just from looking at the grid like you can in some of my other themelesses. The most obvious example is my cluing LOAD with reference to weightlifting, but others are TURTLE as a mythological bearer of the world and Milton Friedman as my chosen ECONomist.

I have a feeling this puzzle is going to be quite polarizing, and I hope that many solvers eventually have the same reaction to my seed entries (ACCENT AIGU and CAERPHILLY) as I did when I first encountered them: "This is a word/phrase I didn't know before, but now I am glad to know it." I guess I've known about CAERPHILLY longer than I've known how to make a themeless puzzle, since I love cheese. I'm also originally from Philadelphia, so the first time I saw CAERPHILLY (which has absolutely nothing to do with the cheeses commonly used on cheesesteak) I got a kick out of the name and its utterly (udderly?) non-Philly origins.

When I started constructing again last year, I said I was going to stick to themeless puzzles. I mean, how on-brand is that for someone who spends as much time as I do complaining that the NYT puzzles are too easy? But I suppose eight years of collaborating with Bruce Venzke meant there was always some part of my brain subconsciously putting themes together, and that part woke right back up.

Although I've already had two other solo submissions, both themeless, published in NYT since I became a solo artist, this is the first puzzle of mine that he accepted back in June 2019. I was worried that when I looked at it again more than a year later, that I'd hate it. But I still like it. Phew! "Phrases with related words at end" is not exactly the most innovative theme trope in the world, but I think I get some points for execution.

Over the past couple of years, my husband and I have become novice jazz lovers. As part of our neophyte education, last year we saw the documentary Miles Davis: Birth of the Cool. I was struck by how many times Davis managed to reinvent his musical style and, in so doing, push the genre forward, and I knew I wanted to make a puzzle that honored him in some way. I landed on SKETCHES OF SPAIN as a 15-letter seed that, although it's a piece of trivia knowledge, is also clue-able beyond "here is a random factoid" — the clue specifically references the flamenco inspiration for the album so that solvers who get it from the crossings can go, "Oh, I get it."

If even one person gives Miles Davis a listen after solving this puzzle, that's a win for me.

Given that I spend too much time on Twitter complaining that the NYT weekend puzzles have gotten too easy, it's only right that my comeback as a constructor, and my solo debut, should be on a Saturday. (Feel free to razz me if this one turned out easy for you.)

When I quit constructing in 2010, I was fine with my decision. I was pursuing a lot of other interests, and eventually, I started writing trivia, which scratches my itch for clue-writing but with fewer constraints. So, despite being part of the crossword community all this time, I didn't miss making puzzles. But over the past couple of years, as the conversation has turned more to the underrepresentation of women in puzzles, I started to feel a little guilty about not constructing. I also realized that I wanted the puzzles I solve not to be so bro all the time! In 2019 I decided it was time to be the change I want to see in the world.

When I worked with Bruce Venzke, our arrangement was that one or the other of us would come up with a theme (if any), he made the grids, and I wrote the clues. So despite having published many, many crosswords, I felt very unqualified to do it on my own at first. At the 2019 ACPT, there was so much great discussion about constructing and women in puzzles, and of course, placing the highest I've ever placed as a solver helped to light a fire under me to get started. I asked Andy Kravis over and traded him a home-cooked meal for a gridmaking tutorial, for which I am eternally grateful.

Don't call it a comeback. I've been here for years! But I'm thrilled to be back as a solo artist, making puzzles with my own womanly voice.