This web browser is not supported. Use Chrome, Edge, Safari, or Firefox for best results.
XWord Info Home Authors by day of week | by year | Puzzles listed by constructor | Normal mode | Word cloud 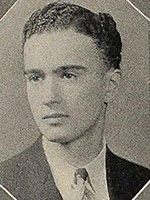 View these same grids with comments from:
David Steinberg (4)

Sidney L. Robbins was born in Manhattan in 1909, the son of Herman and Mary (Susnitsky) Rabinowitz. He grew up in Brooklyn and attended Columbia College, graduating in 1930. In 1946, he married Beatrice Levine. Sidney was an executive in a leather manufacturing business.

Only the 30 most recent grids are analyzed in this view. Here are the rest: