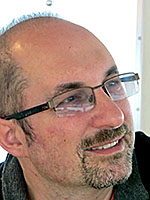 I dearly want tricky, rule-bending puzzles on Thursdays, but many solvers vociferously disagree. Will Shortz has a tough job, trying to cater to such a wide range of tastes. He did a fine job straddling the line today, with a theme that seemed easy enough on paper, but one that put up an enjoyable fight.

It didn't take long to uncover RENAISSANCE FOUR, given how familiar my son has forced me to become with the Teenage Mutant Ninja Turtles. FOUR from "fair" felt easy enough, too, so I worried that this would be yet another Thursday that disappointed.

Not so! That "air" to "or" sound change wasn't as simple as I thought. Even after solving MUSICAL CHORES, it took me a hot minute to figure out the CHORES from "chairs" change. And then I sat back to admire the neat transformation involving a big spelling change.

The huge winner for this sci-fi dork: aliens shouting there's NO TIME TO SPORE! Worth the price of admission all by itself.

Sheldon didn't go down to 72 words like Byron and Chris earlier this week, but he did use some tough vocab that you might expect to see in a low-word-counter, ANTRUM in particular. However, for a Thursday puzzle — with a surprisingly difficult-to-grasp theme concept — it syncs well.

Yes, some solvers won't know what ANTRUM means, but it's (just as valid) as ZOYSIA, and given the day of the week, encountering something one doesn't know isn't uncommon.

I frequently ride Will about running Thursday puzzles boringly simple themes, making them not worth the Thursday effort of fighting with tough clues. On paper, I should have criticized him again today, but I enjoyed the crunchy solving experience, the themers more difficult to make sense of than I would have imagined. Well done to both Sheldon and Will!