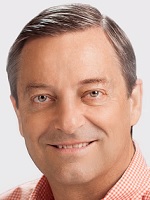 Funny that today's theme uses hidden synonyms for "failure," as the puzzle was quite the opposite of that — good theme answers, solid long bonuses, and a smooth product. Very nice early-week puzzle.

I did pick up the theme early on, after BOMB and FLOP — I've seen FOSBURY FLOP used in a similar vein before — but not all themes have to be completely innovative. This one works well, with the "failure" synonym pretty well disguised. ROAST TURKEY works the best, as the "bird" meaning of TURKEY is completely different than the "failure" meaning.

I did pause at HOLLYWOOD OR BUST, partially because I didn't recognize the movie (that's fine, probably a generational issue), but more importantly, the "failure" meaning of BUST isn't changed — I like it much better when synonym themes obfuscate what's going on. Randy did well to at least place this one at the bottom of the puzzle, but I would have preferred another well-disguised synonym. Perhaps hiding BUST better in something like DRUG BUST?

MILK DUD could have been another good themer option, smack dab in the middle of the puzzle.

Beautifully smooth grid, near perfect for a Monday. Some may complain about RABAT crossing Ayn RAND — sometimes haters pooh-pooh crosswords because "you have to know trivia" — but world capitals are something every educated solver ought to at least recognize, and Ayn Rand was an influential writer. With just a GOER for crossword glue, I found it to be such a silky-smooth solve, prime for beginners.

A couple of nice bonuses in NERF GUN, BROADWAY (with ROAD appropriately pointed out in BROADWAY!), ARLO / GUTHRIE. It would have been great to get one more pair of long goodies, perhaps by eliminating the black square between A LOT and SAJAK.

Eliminating that black square would also help another (minor) problem: see how the black squares force the solver to progress in a Z shape? Much better is to allow the solver to flow through the grid however he or she chooses.

But these are minor issues. If HOLLYWOOD OR BUST had better obfuscated the "failure" meaning of BUST, this would have been right up there for the POW!