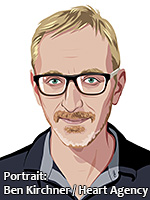 Peter Gordon is a puzzlemaker and editor from Great Neck, N.Y. He has been a puzzle editor for Games magazine, Sterling Publishing, and the bygone New York Sun. Since 2010 he has edited Fireball Crosswords, a 45-times-a-year online-only super-challenger.

Peter Gordon is one of my favorite constructors and, as usual, I liked this one more than Jeff did. Chacun à son goût, and all that.

Mr. Gordon famously based this 2001 puzzle on Scrabble scores.

My proof that the two-thirds of the Fibonacci numbers must be odd:

The sequence starts 1, 1. Each subsequent number is the sum of the previous two.

Now, look at any even number in the sequence. I'll use 8 in this example, but any even number will do. The number before it (5) must be odd because there are no consecutive evens, so the next number, the sum of those two, the sum of an even and an odd (5+8), must also be odd (13.) Continue to the number after that. It must be odd too because it's the sum of the previous odd number (13) plus the one before that (which must be even, in this example, 8.)

After that, we have the sum of two odd numbers, which is even, and the odd-odd-even cycle repeats.

You might not remember Peter and Gordon, but I bet you can recall this song.

Peter Gordon is a long-time puzzle maker and crossword editor. Serious solvers love his challenging Fireball Crosswords, available by subscription. How hard are they? "If you have to ask, too hard for you."

I particularly enjoy his Fireball Newsflash Crosswords, with their amazingly timely content. They must, indeed, be constructed in a flash.

Terrific puzzle! Here's the A. J. Jacobs page on Amazon.

Trivia question: Besides Benjamin Harrison, name two other former White House denizens whose names are double dactyls. You'll know them when you get them.

All good things must end but I, for one, am sad to see NYT Crosswords wrap up. At least I'll now have time to work on my table tennis game.

See the story of the highlighted Across answers here.

This puzzle has the lowest average Scrabble score in the database. In fact, if you look closely at this crossword you'll see that this is a record that can never be broken. See 65 Down.

Update: Bruce Haight tied this record in this 2017 puzzle.

See the notes on this puzzle for a charming story on what all this pregnancy was about.

The Shortz Era began with this rainbow grid from Peter Gordon, a tribute to the much-heralded Roy G. Biv. There was an earlier more straightforward rainbow theme back in 1981.