229 puzzles by Patrick Berry
with Will Shortz comments 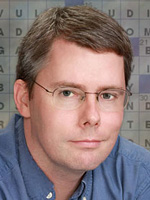 While I don't award "points" to crossword entries (as in your example), your general way of assessing crossword quality is the same as mine.

When I look at any crossword submission, which I prefer to do on paper, I mark up the answer grid — a check mark for an entry I like (on rare occasions two checks for one I really, really like), a minus for an entry I don't, and an "x" for one that's wrong or truly awful. The size of the mark indicates the depth of my feeling about it, so a bit of crosswordese might get a small minus, a stupid obscurity a big one.

When I'm done, I pull back and look at the puzzle overall to make a decision. An "x," of course, almost always means rejection. If there are no x's, then I judge whether there are enough entries that excite me to outweigh the ones that don't.

You're right that too many minuses will sink a puzzle even if there's lots of good stuff. I don't set an arbitrary limit on weak entries, but more than five, especially if they're bad, will put the puzzle in dangerous territory.

The bar for acceptance keeps getting raised. Many of the puzzles I published 10 years ago wouldn't be accepted today. Even marginal yeses of a year or two ago might be nos now.

That said, to me crossword quality is a matter of balance. Unlike some other editors and commenters on the crossword blogs, I will accept some crosswordese and obscurity in a puzzle (assuming it's fairly crossed and clued), if the upside is strong enough. Sometimes I think it's worth having a subpar entry in order to set up other material that's great. The greater the great stuff, a little more subpar there can be. Squeaky clean isn't always best.

My bottom line is that a puzzle should be judged as a whole, as ordinary solvers judge puzzles, not on just the least appealing entries.

I hold Patrick Berry in such awe that (I hope he doesn't mind my telling you this) I was flabbergasted to find he'd misspelled the answer at 7D. The 1990s rap duo, known for wearing their clothing backward, is spelled Kris Kross. KRISS KROSS, with two doubled S's, is the name of the skeleton/fill-in puzzle in Dell puzzle magazines, popular since the 1930s. I'm glad I was able to save this answer with a new clue, because the middle area of the grid was not going to be "fixed"!

It's hard to add a new superlative to Patrick Berry's work, for its smoothness and liveliness, so I won't try. Suffice it to say this puzzle is a typical beauty from Patrick. I'll take the credit (or blame) for the clue at 18A, which is drawn from the show's pilot episode.

I'm so impressed with every crossword Patrick constructs — fresh, interesting vocabulary, with no junk. He makes constructing seem effortless, which it definitely isn't. His clues are excellent, too. My favorite one here is 35A.