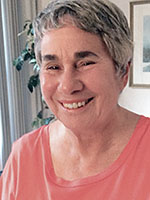 NANCY: I initially had an idea for a puzzle about "spoilers" but my many theme answer ideas were all over the map. Nor did I have a really good method for how to clue them smoothly. I think I remember that I had a lot of cross-referencing between the clue and the answer and that the clues tended to be overlong.

Enter Will Nediger. First, he whittled down my theme ideas to come up with the three that were the strongest and the most internally consistent. And then he found this incredibly elegant way of cluing them: brief, clear, simple, and completely fair. Provoking curiosity but giving absolutely nothing away. When I saw his solution — one I don't think I would have thought of on my own — I may have actually shouted "Eureka!"

My second "Eureka!" was when SPOILER ALERT turned out to have the same number of letters as TOO MANY COOKS. From such serendipitous occurrences comes the untrammeled joy of the puzzle constructor :)

WILL: I'm really proud of the construction and the tightness of the theme here. In retrospect, though, I regret including "spare the rod..." in a wordplay theme (my responsibility entirely, not Nancy's!). I tend to think of it as a quaint saying because it's now widely understood that corporal punishment is harmful and wrong, but of course, it's not entirely a thing of the past — I apologize to anyone whose solving experience was soured by its inclusion.

NANCY: Rebuses tend to be my favorite puzzle type, so in this instance, I consciously went seeking a rebus idea. Using a phrase with "box" in it seemed like it would work well. There were many possibilities, but as soon as "chatterbox" crossed my mind, it seemed that that would produce the most amusing results.

I came up with the three short "chatter" words, but I'm sure there must have been snags along the way in incorporating them into themer answers. (Who can remember from so long ago?) But whatever they were, they did not remain snags for long, because my incomparable collaborator found ways to make everything work as he always does. And, of course, Will also constructed the grid. It was a smooth-as-silk collaboration as it always is.

I will now go and try to solve this puzzle when it appears, avoiding the theme answers and working on everything else — because, being me, I've, of course, forgotten everything else:)

WILL: I imagine CACHINNATE will be new to a lot of solvers. Normally, I try to avoid obscurities, but CACHINNATE is the sort of delightful literary word that I enjoy and that I don't mind including on a Thursday (with clean crossings, of course). If it's new to you, I hope you're happy to learn about it!

On a completely separate note: Nancy wisely talked me out of my half-serious idea of cluing BEN and EKING together as the singer of "Stand By Me." But man, I wish there were more ways to clue EKE.

NANCY STARK: It wasn't until I had finally finished coming up with all the theme answers and all the clues for all the theme answers that I finally got a decent night's sleep. I'd lie in bed in the wee hours, night after night, as random, not to mention ridiculous non-Spoonerisms would cascade through my head. I found myself trying to create a Spoonerism out of every two-word or two-syllable phrase I'd ever heard in my entire life: BOATING VOOTH; DATER ME; COARSE MODE; POLE GHOSTS. What was worse, I couldn't stop. (If you try it tonight, people, I can guarantee you a night of pure insomnia.) My first thought when Will Nediger said he liked the final 18-letter theme answer I sent to him was: Thank God. Now I can finally sleep!!

The one thing you know working with Will is that, no matter how constraining and challenging the theme and theme answers you give him, he'll find a way to build a grid around them. He's a genius in doing that. He even asked me, after I had sent him about four or five 18-letter possibilities and about four or five 14-letter possibilities, whether I'd prefer him to create a grid with four 14s and two 18s or with two 14s and four 18s? Assuming that the latter would be much harder for him, but also more challenging and interesting for solvers, I requested the latter. "But only if it won't be a problem," I said. "Fine," he replied, and provided it with no further ado and in record time. You can see for yourself how good it is. I do hope you understand that not everyone would be able to do that.

WILL NEDIGER: As always with our COLLABs, Nancy came up with the theme for this one. Spoonerisms have been done before, of course, but I quite like these theme entries, because all of them involve spelling changes, adding a little bit of an element of surprise, and because they all came straight from Nancy's own brain. It would've been easy to just look up lists of spoonerisms and find hundreds of possibilities, but these are all originals. Plus, I learned that STEVEDORE is pronounced with three syllables!

NANCY: Remember me? I'm the co-constructor of the March 14, 2019, NYT "Black Hat" puzzle, created with the very talented, versatile and delightful-to-work-with Will Nediger — cruciverbalist extraordinaire. We're back together again for this latest collaboration — with him once again entirely in charge of the always-challenging and difficult grid-making and with me happy to have been able to come up a theme that inspired him to want to do so.

Last time I, tennis player that I am, compared myself to Peter Fleming playing doubles with the great John McEnroe ("The best doubles team in the world? McEnroe and anyone," said Fleming.) Since that went over the heads of many readers unfamiliar with tennis, I'm choosing a different analogy: Creating a puzzle with Will Nediger is like dancing with the great Fred Astaire. Never mind Ginger and Cyd; Fred could make the broom look good.

As for me: I'm a former editor of the Literary Guild; the author of "Upward Nobility", a corporate satire published in 1979 under the pseudonym "Addison Steele"; an alum of the Advanced BMI Composers and Lyricists Workshop, and a lyricist whose songs have been performed in NYC cabarets but not, alas, on a Broadway stage near you. Some of my theater songs are online on the composer David Delaney's website. Put in him + me + DOWAGER HEIGHTS, and you just might find it. :)

This is my second puzzle to be published in the NYT. Will has many, many more.

WILL: Last time, I was one of the people who didn't know enough about tennis to appreciate Nancy's McEnroe/Fleming analogy. I'm glad she chose a Fred Astaire analogy this time, because it's much more in my wheelhouse, but also because it gives me an opportunity to remind her that Ginger Rogers did everything Astaire did, but backward and in high heels.

As a passionate lifelong recreational tennis player, I have always loved the comment from Peter Fleming, winner of an astounding 52 doubles titles including seven Grand Slams with his partner John McEnroe: "The best doubles pair in the world is John McEnroe and anybody." And so, too, I have found myself fortunate enough to collaborate with Will Nediger — surely one of the best crossword constructors working today. In addition to being a consummate professional, he is a joy to work with — generous, good-natured, laid back, and seemingly without ego.

Knowing that I couldn't construct a crossword grid if my life depended on it, I wondered if having a good idea might "earn" me a top puzzle pro. Of course, having a good idea is not so easy: as one constructor/blog friend told me: "Ideas never come when you're trying to think them up. They come when you least expect them." As did this one. I don't remember the moment of inspiration, but once I sat down with the idea and saw that the symmetry would work, I thought: this is the one for which I should try to find a collaborator. Thanks to Lewis Rothlein and Erik Agard for getting me to Will Nediger.

As a solver, I like my puzzles tough and, even more, I like them tricky. That's the kind of puzzle I wanted to bestow on the puzzle-solving community. Hoping that it will give solvers the big "Aha Moment" that the best trick puzzles always give me.

About my background: I'm a writer, lyricist, and former Book Club Editor. I'm a lifelong Manhattanite and have had had Home Delivery from the NYT since 1971.

Admittedly, I don't know anything about Peter Fleming, but Nancy is surely selling herself short here. The theme is the most important part of a puzzle, after all, and Nancy is a theme-making machine. She's also a delight to work with, and we've already got one more upcoming collaboration in the Times, hopefully not the last!