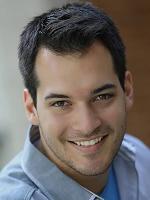 Whoever runs NBC's schedule has to be a crossword person. Has to! How else can you explain how tidily the following lengths match up:

A complete set of titles + major players = crossword gold. I love it!

Mike did a nice job with his grid, too. PAPER MOON and GODPARENT are solid feature bonuses. AP TEST, QATARI, SOAPBOX further enhanced my solve.

A couple of dings in SNO KAN ARAL, but I think the trade-offs here are very good.

The lone sticking point for me was the ERLE / ESL crossing. I think most solvers ought to be able to get it. But I wonder if there are going to be some newbies who'll struggle in coming up with English as a Second Language, and I don't blame others for not being familiar with ERLE Stanley Gardner. Hopefully, the overlap in the Venn diagram isn't big.

An amazing theme find today. Neither JEOPARDY nor WHEEL OF / FORTUNE could have made for a puzzle of their own, but paired — as they are on many stations — they synergize to make such a neatly complete puzzle. I liked it enough to give it POW! consideration, but there's one coming up this week that really stood out for me.

★ Now, these are the kinds of "hidden word" finds I like! It seems a little miraculous that something as long as DISCOVER could span two words of a normal phrase. AMEX is shorter and thus easier to work with, but that X ratchets up the difficulty. And even VISA's VI or VIS is no joke. Three great discoveries made for a great theme, CARDHOLDER a perfect revealer. Delightful!

Made me wonder what other possible themers were out there. VIS A VIS is the obvious one, but that doesn't hold a candle to the awesome ELVIS AND ME. There's NOVI SAD, the Serbian city, but that seems hardly crossworthy — not novice friendly, in any case.

And such a wealth of rare letters in the fill, (mostly) worked in so smoothly! Two Js, three Xs, two Zs, that's way more than a usual puzzle contains. ITEN was a price to pay for the two Zs in OZZY, but I was okay with that trade-off.

The only hesitation I had before giving this the POW! … two crossings that I worried might trip up newer solvers:

So the J in AJAX is the one rare letter that I didn't think was worth it, leading to a tough crossing that might trip up newer solvers.

But overall, I loved the theme DISCOVERies (I did wonder about MASTERCARD to get the full set, but what are you gonna do?) and 95% of the grid execution.

One of those eye-opening themes, a Wish-I-Thought-of-That (WITT). I'm in agreement with Will, it would have been just about a perfect theme if Michael could have found even just three examples where the three letters were consecutive. I'm not a big fan of random circled letters, so the consecutive trios were particularly pleasing to my eye. Bravo for uncovering this theme, Michael, very fun.

I never used to pay attention to my 1-across, but I've come to realize that consciously or subconsciously, solvers' perceptions tend to be affected right away in that NW corner. And to start off with a relatively esoteric Spanish word crossing A MOLE ... not a great first impression for me. I think it affected my perception of the puzzle, especially upon seeing PRS, ENOL (with a crazy clue), ALEE, et al. as I went.

I did really like some of the long fill, SHADOWBOX and PAY TO PLAY adding a lot of body to the puzzle. But my constructor's brain just couldn't help wondering why with only four themers, two long downs, and a 78-word puzzle, there seemed to be quite a few compromises. I can understand why someone would include SABO (MLB or Reds fans — glad to hear Michael's thinking on that), but ENOL is pretty easy to replace with something much nicer. Same goes for SALA/AMOLE/ATESTS in that isolated NW corner.

Perhaps some solvers (and chemists) will argue that they like the crosswordese ENOL, because it helps them get a toehold as a freebie. But I strongly feel that this sort of thinking turns off newer solvers, as well as a more recent generation, and constructors should avoid this rationale whenever possible. As Will says in his submission guidelines: "Keep crosswordese to a minimum."

And I can understand Will's editorial philosophy of "let the constructor's fill stand unless there's something that REALLY needs to be fixed." There is a certain beauty in that, as the constructor is allowed to present his/her work as he/she intended. I don't think it's the philosophy I'd take if I were editor, but I respect Will's belief. So given that, I would ask any constructors reading this post to keep Will's above criteria always in mind. Totally fine if a challenging construction requires a weird little entry or two, but if at all possible, why not strive for perfection?

Overall, a very nice theme which I felt could have been made golden by upping the quality of some fill, notably the SW and NW corners. I'm not as rabid/fanatical about "The War on Fill" as others, but I do think that as with every evolving, competitive market, the NYT must continually work to maintain its reputation as the gold standard in daily crosswords.