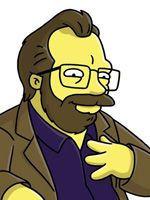 Beloved constructor Merl Reagle constructed the Sunday crossword for the San Francisco Chronicle (widely syndicated) every Sunday for 30 years. He starred in the 2006 documentary, Wordplay, which followed the American Crossword Puzzle Tournament that year. The tournament now annually presents the MEmoRiaL Award, a lifetime achievement award in the form of a snow globe with Mr. Reagle inside.

The photo here is from his appearance on The Simpsons.