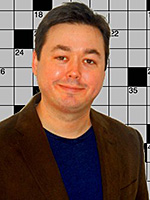 The first two theme answers came easily to me when I noticed how similar JINGLEBELLS and THEJUNGLEBOOK sounded — "jingle" vs. "jungle" and with a "B" word connected to each. But it seemed to me a long shot that I would ever find a "jangle" or "jongle" or "Jengle" also with a B. And with the right lengths? Forget it.

But I brainstormed anyway (this was before I had access to good computer searches), and when I hit upon "MRBOJANGLES" I began to feverishly count letters in all three theme answers, and was thrilled when I realized I had an 11-13-11 puzzle. Matt Gaffney liked the theme and agreed to make the grid for me; this is the only collaboration he's done out of his 58 New York Times puzzles.

Would today's New York Times take a puzzle with such a small number of theme letters (35)? I doubt it. But I think the JINGLE-JANGLE-JUNGLE concept is fun, and with the extra B thrown in it exposes an unusual quirk in the English language. In my opinion, some of today's puzzles get so theme-heavy that simpler grids by newer constructors (this was my first contribution — under the name David Bianco, whereas now I contribute as David Benkof) get squeezed out.