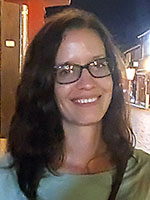 ROSS: I'd been kicking the tires on different GRAVITY'S RAINBOW grids for a couple years when I mentioned this concept to Lindsey. I wasn't sure it was a workable idea, but the smoothness of the final product here is a testament to Lindey's top-notch gridwork.

I've written a bit more about today's grid on my personal puzzle site, Rossword Puzzles, and we'll talking about the construction on Monday evening on my Twitch stream, Cursewords Live. Join us!

LINDSEY: I was psyched when Ross suggested the idea for the puzzle. As a huge admirer of the work of both Thomas Pynchon and Ross, I was enthusiastically on board. The grid layout and fill were not the easiest, but the result is likely the most aesthetically pleasing of any puzzle I've had the pleasure of working on.

While I was delighted when Will Shortz let us know he was planning to run it during Pride month, Pride wasn't actually the inspiration for the puzzle (hence the inclusion of indigo, which I only just recently learned is not on the gay pride flag!). In any case, I'm happy to have our puzzle included here and hope to see more from LGBTQ constructors during all the rest of the months too.

The idea for the puzzle came to me while I was, er, making some iced tea. Because that's what making crosswords does to your brain — compels it to turn otherwise mundane things into goofy crossword themes. I started with APE RECORDER, which immediately brought Jane Goodall to mind, which immediately made me cackle. After toying with some other possibilities, and a lot more cackling, I eventually came up with a workable theme set. A simple concept, but a fun one to make, and I hope a fun one for solvers too!

Very happy to make my Times crossword debut! I've been a daily solver for many years but only decided to try a hand at constructing in the last couple of years. After many failed attempts (I can't say exactly how many, because it's far too embarrassing to look back at my earliest submissions — my sincere apologies to the editorial team, who kindly reviewed them and gave thoughtful feedback for each), I finally hit on something with this one.

The idea came to mind back in January when Australia was frequently in the news as a result of the massive wildfires happening there — feels like ages ago now! Using DOWN UNDER to indicate theme answers that literally move down and then under seemed like a great premise for a puzzle, and miraculously, most of the potential theme answers I came up with also worked well in that structure. The puzzle went through several iterations, thanks to the editors and feedback from other constructors, and is much the better for it.

A shout out to my crossword mentor, Ross Trudeau, and the folks at the Crossword Puzzle Collaboration group for their incredible support for underrepresented constructors!