Yet another debut! That make four days in a row, as well as four Thursdays in a row. New voices and new ideas are a great thing. 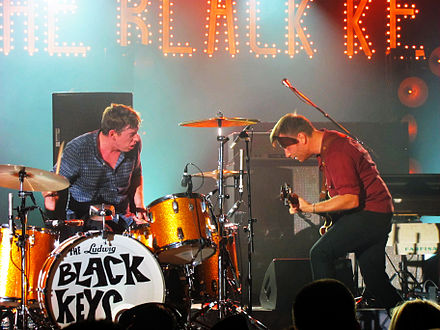 Love this particular idea, BLACK rebus squares helping to take away the perceived ASYMMETRY. (I've grayed out the rebus squares to better illustrate this point.) I saw this idea maybe seven years ago (in a different venue) and thought it was the coolest concept ever! Even though the novelty wasn't there for me this time, I still enjoyed the effect.

Some great entries, starting off with the themers. Particularly cool to get a BLACK box in the middle of a phrase, in THE BLACK KEYS. But even BLACK BEAR, which looks so close to BLACK BEARD (there's a crossword theme in there somewhere …), and the finance term IN THE BLACK are awfully fun.

Loved TERMINATOR in the fill, too. I hope this factoid — 100% positive rating on Rotten Tomatoes — doesn't prompt crossword trolls to go give it negative ratings. Don't do it, people!

Some mid-length MAMMOTH, CARNAGE, SHINTO also added to the quality of my solve. A singular SCRUPLE was a bit odd, but it does have dictionary support.

Just a little too much crossword glue for my taste today. I didn't start noticing it until I hit SES / TET, but then I started picking up OLEO (which admittedly some people think is fine), MAL, ARA, MTS. Nothing cringeworthy, but as a whole, just up against my threshold.