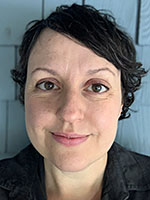 I always enjoyed crosswords, but I really got into solving when I became a parent. Puzzles are easy to pick up and put down between the constant interruptions (and intermittent joys) of childcare. When my youngest was two, I decided to take a crack at constructing.

I probably should have found a mentor and researched crossword venues, but why do things the easy way? Instead, I just sent every puzzle I made to Will Shortz. As the rejection emails rolled in, the detailed feedback from NYT editors helped me understand what I was doing wrong and, occasionally, right.

Eventually, I researched other venues and discovered the daring, dynamic "yes" culture of indie publishers. Ben Tausig at AVCX said yes to my debut puzzle and offered brilliant guidance at every stage of development. Tracy Bennett and Laura Braunstein said yes when I asked to join the Inkubator team. Evan Birnholz encouraged me to apply to Vox.com, and they said yes too — I now publish a crossword there every Tuesday.

This is all just to say thanks to those who've offered their knowledge and support since I took that first shot in the dark three years ago. It's led to so many good things, including this "yes" from the New York Times.

I happened upon the term WEATHER BALLOONS as I was searching for entries for another theme set. It captured my imagination, and I started to think of how to put balloons in a crossword. I like that there's a visual pun in this puzzle — the circle rebuses could be little balloons floating across the grid.

I wrote many tricky clues for this puzzle, and several weren't quite right for a Wednesday. My favorites are:

I am delighted that a fair amount of my clues did make it in, particularly the one for EGOT. I also appreciate the NYT editors' clever cluing of OBI and SLICED BREAD.

More to come, I hope!