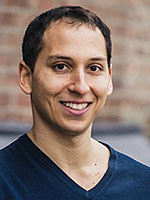 Thrilled to be back in the NYT for another Saturday! This was my first attempt at a triple stack, and I am pretty thrilled with how it turned out. As a solver, I don't like how most puzzles with stacks tend to sacrifice the more fun mid-length answers (7-10 letters), so I wanted to try to jam as many into this version as I could.

In retrospect, I would probably try to restructure to either improve or just cut off the two outer ones (MARVEL OVER and JOHN DRYDEN are not quite pulling their weight), but otherwise, I hope this puzzle provides some fun beyond just solving the stack.

Excited to be back in the NYT, this time with a themed puzzle — my first!

This started with Usain Bolt's incredibly apt name, and I figured it would be easy to find other examples of what I later learned are called "aptonyms". Turns out there aren't many good examples, and keeping them bound to sports figures kept it a pretty tight theme.

The only name I came across after submitting was poker pro Chris Moneymaker — and while his name is beyond perfect, he is probably just a bit too out of the public eye to be worthy for inclusion. Hope you enjoy!

I'm thrilled to be back in the NYT with another Friday!! This puzzle was largely made from the discarded parts that I couldn't fit into my previous themelesses but I couldn't quite let go of.

Very excited to be appearing in the NYT again! While this is my second themeless published, it was the first themeless I ever made — so it will always hold a special place in my heart.

This was initially seeded with MAKE LOVE NOT WAR, which I was surprised to see had never made its way into an NYT puzzle before. In retrospect, I wish I had a better 15-Down to complement it (CASSETTE PLAYER isn't necessarily the snazziest entry), but hopefully that is made up in the solver experience with the great clue (full credit to the editors for that clue).

My original submission was rejected by the editing team, who said they would be open to taking a second look with some updates to the northwest and southwest corners. I was happy to find suitable replacements that fit in without much rework.

Hello everyone — I am excited to be making my NYT debut!

My general approach for themeless puzzles is to try to jam as many fun and colorful entries in as I can while minimizing proper nouns … and if that means a higher word count or adding cheater squares or harmless bits of crosswordese then so be it. So, while there are certainly a few bits crosswordese and initialisms, given those parameters, this was pretty successful!

With three intertwined grid-spanning entries you would think those were the seed entries, but the seed was the crossing of ELEVATOR PITCH and TURDUCKEN — which were my two favorite entries from a previous puzzle that I ended up scrapping. The sides were initially closed off, but after a bunch of unsuccessful iterations, I opened them up and was pleased to find RENEWABLE ENERGY and THAT HITS THE SPOT fitting in great. I filled in the rest from the top-down, with THE WAR ON DRUGS being a late addition for how prominent it is.

A big thank you to the editors for greatly improving the puzzle, and an even bigger thank you to my initial editor (my mom) who took the first pass at this and all my other submitted puzzles and pointed out all my bad puns that made no sense. I have four other accepted puzzles (1 Weds, 2 Fri, 1 Sat) pending publish, so you should be seeing more of me soon.