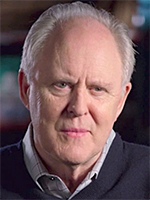 JOHN: Not long ago, Will Shortz found out that I solved the puzzle daily and thought to link me as a "Celebrity Collaborator" with Brendan Emmett Quigley, one of his best puzzle constructors. By good fortune, at the time I was shooting DADDY'S HOME 2 in Boston, where Brendan lives. He and I met for dinner in a South End restaurant, just to get to know each other. A hyper-alert, excitable man, Brendan could barely contain himself. Before the main course even arrived, he lurched down, took a laptop out of his bag, and began my lightning-quick education in how to construct a Times crossroad.

Our first challenge was to come up with a theme that reflected my public persona and profession. We hit on one that I thought was pretty clever, involving a rebus of the word "act": "infraction", "factotum", etc. That was when I learned just how involved Will Shortz was in every single Times crossword: Brendan ran the "act" rebus by him, and he damned us with faint praise and said that we could do better.

In a few two-hour sessions in my Back Bay hotel room, with Brendan pacing around and staring at the traffic on Commonwealth Avenue, we hashed out the puzzle that appears in the October 18 edition of the New York Times. Brendan taught me volumes about the dark mysteries of puzzle creation as if he were giving me a backstage tour of the Met Opera House after a production full of dazzling stage effects. Our handiwork arrives about four months after we finished it, a period when I have had to keep its clues a secret from all my puzzle pals. This has been a task even harder than creating the puzzle itself. I'm that excited and that proud.

I hope you enjoy solving it one tenth as much as I enjoyed creating it. Well, co-creating. I'm nothing without the remarkable Mr. Quigley.

BRENDAN: It was a joy to work with John. It felt at times that he was tackling this project much like a method actor would tackle a juicy role. He went from learning about the characters in the crossword world and their philosophies behind puzzles to taking this information and imbuing it with his own experiences to make a puzzle himself. He had a hand in everything from theme development to grid construction to cluing.

In regards to the grid, I spaced the theme answers in a way that each corner would have flexibility, and so we crammed them with as much theater-related content as possible. KATISHA is possibly my favorite answer that's appeared in all of my puzzles this year, and it was all John.