★ Sometimes I miss the cleverness a puzzle brings. Today, I wondered why AGUA was a Latin American capital — perhaps it was a currency unit of Guatemala or Nicaragua? And the theme didn't really make sense to me. I saw the sets of two MAN entries "spread out" from where they were supposed to be, but that seemed like it didn't really jive with CUT OUT THE / MIDDLEMAN. So I shrugged and went on with my day.

One of the many great things about providing daily commentary about puzzles is that it forces me to go back and revisit them. Not only does it help my own construction skill development, but I uncover elements I missed the first time around. So to finally grok that AGUA was actually (MAN)AGUA, with the middle of three MAN entries cut out … yes! A great a-ha moment.

The same goes for RAIN(MAN)'s middle MAN cut out, and THE ICE(MAN) COMETH as well. I particularly liked that central one, the cut out MAN sitting in the middle of HIT(MAN) and (MAN)ANA.

I'll explain Will's and then John's cryptic clue for ETA, since I still didn't get it after John hinted above at its awesomeness. (I had to ask John about it, FYI.) Apparently when fraternities and sororities launch new chapters at different schools, they label them with Greek letters, i.e. the first chapter is the Alpha Chapter, the second is the Beta Chapter, etc. So although it requires a deep understanding of an esoteric subject, but the repurposing of the bankruptcy term "Chapter 7" is really neat.

I might have liked all the MAN entries to be more hidden as in MANDY and MANAGUA, but overall, a beautiful, clean execution on a great idea. I know it's not currently possible, but how awesome would it be to open up your newspaper and find three chunks physically cut out of your crossword, like so?

Tricksy stuff today, REPEAT hinting at the fact that certain three-letter words do double-duty. Took me a while to cotton to the gimmick, but PERCY BYSSHE (SHE)LLY cleared it up. Nice find there! I liked how the overlaps were all actual quality three-letter words: PIE, LET, SHE, DON, PAL.

Interesting point to me today was the placement of the revealer — it's so hard to get a six-letter word down in the last across answer. Seems like an odd statement, doesn't it? How hard could that be, considering many, many puzzles use five-letter revealers in that location without a hitch? But when you have a five-entry theme, the addition of that sixth letter on the revealer makes for a huge change in difficulty.

Why? With five themers, you're almost always going to have some overlap between one of your themers and your revealer. Look at how much real estate there is between the end of LANDONOVAN and REPEAT. That 6x4 SE corner is no joke. John does well to make it a 6x4 block rather than a 6x3 (as he could have by moving LANDONOVAN down one row), since the extra space gives him more flexibility in that SE corner. Impressive that John nailed it. 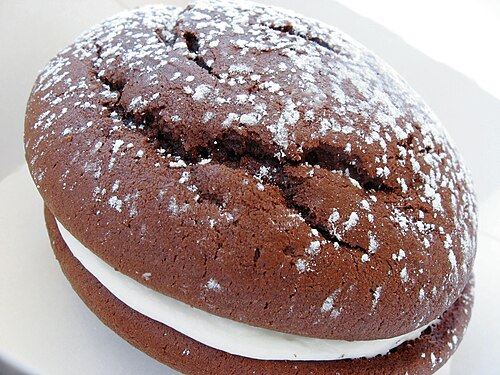 I found it a little odd that WHOOPIE PIES turned into WHOOPIES was included. The others have three-letter words unrelated to the base phrase, so to see PIES and PIE felt odd. Consistency is something I find elegant in a puzzle, and WHOOPIES felt like the one that didn't seem like the others. I do like how hilarious the term sounds (yes, I'm a fourth-grader at heart) and how delicious it looks, though.

Smooth offering today, with just NEBS making me scratch my head (but apparently it's a real thing!), and a couple of nice variations on clever clues for short answers (ANODE the favorite for this physics junkie). I would have loved if the beautiful PRIME RIB and CORNUCOPIA could have gotten clever clues as well, since devilishly hard clues for those nice long entries make them even better.

Nice puzzle from John today, with a highlight of NOBODYS HOME and its brilliant clue. Bravo as well for the misdirectional clue "John Paul's successor", referring to John Paul Stevens, not Pope John Paul (I or II). I tried LEOIX, LEOXI, PIUSI, etc. until I realized that both Pope John Pauls were recent. I blame the fact that my buddy Merlin gave me his backward-progressing timeline. I'll tell you all about tomorrow's puzzle yesterday.

Quite a bit of good stuff in this puzzle, as Will mentioned. The SE stack in particular is fantastic, with not only three great answers but two more (RED ZONE and SPAMALOT) crossing them all. Now that's a beautiful piece of construction. I also appreciated how little dreck John incorporated overall. APTER isn't great ("more apt" being more common) and ULCER feels a bit grim, but overall, excellent work.

TURTLE DIARY: curious choice of answer. There are only two slots for 11-letter entries, and at first, I winced when I needed most of the crossings to uncover what seemed to be two random words strung together. After some searching, I found that the movie made $2.2M domestically. Yes, Harold Pinter (definitely gridworthy, Nobelist in Literature) wrote the script for TURTLE DIARY, but it still feels a touch questionable. I was curious if it was a necessary evil to make CAMERA SHY/EYE EXAM/BAD END section possible, or if it was a seed entry, so I'm very glad John weighed in on that (I will see it, John, thanks for the recommendation!). As for F SHAPED, I played cello for 20 years, so from my perspective, F SHAPED was both a gimme and an asset to the puzzle. The great thing about the diversity of constructors is that we as solvers get exposed to a huge range of subjects.

Finally, I love the fact that Will points out an entry he wants to see less (or none) of. SDI was an important acronym 30 years ago, but it's faded into the background by this point. It's important for crosswords to evolve, to keep relevant to people's lives, and I enjoy observing this process of adaptation. I really appreciate hardly ever seeing ADIT (esoteric term for a mine opening) anymore: ADIT instances in the Maleska era = well over 100 (in the puzzles litzed so far), in the Shortz era = 20.

Genius idea for a Sunday puzzle, a true WITT (Wish I'd Thought of That). The theme answers relate to American currency, so the one-dollar bill is represented by DENZEL WASHINGTON crossing 1 SEC, the ten-dollar bill by LINDA HAMILTON crossing HANGS 10, etc.

Incredibly difficult construction, perhaps one of the hardest I've run across in five years of analyzing the NYT xw. Not only does John incorporate 1.) a dollar sign in black squares (in the center of the grid), but 2.) a two-part revealer and 3.) SEVEN crossing theme answer pairs. The fact that he uses several three-letter answers inside the dollar sign necessitates some wide-open sections in all regions of the grid (due to the 140 maximum word count restriction). Amazing that John was able to fill it at all!

As a solver, I was frustrated to not accurately finish the east section, not having heard of HAIRCUT 100 (I searched for their "top hits" and hadn't heard either of those songs) and being only vaguely familiar with MHO (stupid MS in electromechanical engineering, did you teach me nothing?). Every puzzle must trade off thematic density and quality of fill, and I wonder what the result would have been if one of the bills, the 100, had been removed. That would still allow for thematic consistency (incorporating all American bills up to the 50) while giving more flexibility to fill those tough, wide-open areas.

Overall though, I loved the fresh concept and the fantastic "aha moment" it provided.