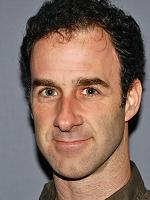 I find it curious that oftentimes my seed entry ends up out of the puzzle when it's all done. Either I find better entries or there's no symmetrical partner for the seed. The seed for this particular puzzle was RAISING McCAIN ("Parenting a future Arizona senator?"), which couldn't find a partner. Another casualty of the puzzle occurred when I realized via a Google search that Nanny McPhee wasn't spelled Nanny McFee (giving me a LATE McFEE). Oops.

As an ardent fan of "Back to the Future" I was sorry to have to SACRIFICE McFLY (sorry, Marty!) but BAR McFLY and FIRE McFLY weren't quite hitting the mark lengthwise, plus they were chopping up the words barfly and firefly rather than having the first word be standalone as in other entries. And DANCING McQUEEN was an early favorite (makes for an amusing mental picture), but it was one 14-letter entry too many.

I was particularly pleased that this one was accepted on its first submission (though I see a few entries were tweaked). Makes me feel like I'm getting better as a constructor. Then again, I also got a couple of rejections this past week, so there's always room for improvement!

I had always wanted to try to make a picture puzzle, so I brainstormed images that could be done with a very small amount of dots to be connected. BIG DIPPER or LITTLE DIPPER was one of the first ideas I hit upon, though it was harder than you would think to get that asymmetric constellation positioned just right! I went with BIG DIPPER for the friendlier 9-letter count, along with its fellow 9-letter partners URSA MAJOR/GREAT BEAR.

I originally rounded it out with NORTH POLE, as in that's where you would always see the BIG DIPPER, but Will and Joel didn't think that was as strong a connection. Also, I had presented the themers in what I thought was a logical, sequential order (and all horizontal) but that presentation cluttered the grid, made for some yucky fill, and gave me triple black squares in the northwest and southwest corners.

Joel and Will suggested NORTH STAR, as in that's what the BIG DIPPER points to. That caused me to abandon the horizontal lineup and go to a pinwheel design of the grid, which improved the fill and cleaned up the blackness. I still had some ugly fill in the northwest until David Steinberg offered a very elegant solution of moving a couple of black squares.

What I'm curious to know from the solving community is how obvious the circles were as far as being in the shape of the Big Dipper in the unsolved grid. Since I started with that image, it always leaped out at me, but did others process it immediately? Our stargazing ancestors picked this pattern out of the sky (twice!), so maybe it's hardwired in our brains regardless of whether it appears in a cluster of stars or a grid of squares!

Over the past 10 years, my wife and I have been slogging through a list of "The World's 100 Greatest Books" as presented by Intelliquest (available on Listology.com, for anyone interested). Last year, I got to "Middlemarch" by George Eliot, who of course was not a George at all. Having recently read and thoroughly enjoyed the latest Robert Galbraith novel, I thought that women with male pen names would make for an interesting theme.

There weren't as many as I'd hoped for, which made symmetry difficult. And there was redundancy: two of them were named George (Eliot and Sand), and all three Bronte sisters took the surname Bell. Eventually, I decided to pair ROBERT GALBRAITH with a revealer, which turned out to be "What each writer in this puzzle has in common: TWO X CHROMOSOMES." However, Joel and Will thought that the revealer wasn't particular strong — or even necessary. In fact, they felt that not providing the author's real names anywhere in the puzzle would be frustrating to solvers. So, it ended up being a case where having a revealer was actually detrimental, which was a new learning experience for me as a constructor.

After going back to the well, I discovered ANDY STACK, whose books I had never read but my wife had. And with Andy (Ann Rule) having just passed away in July, it was a nice way to memorialize her. Have fun solving, and hopefully this puzzle inspires you to pick up a book by one of these authors!

The genesis for this puzzle was when my wife and I went out to Longhorn Steakhouse. They had a coaster that said, "We believe in a job WELL DONE." I took that bit of wordplay and ran with it. Some theme ideas that didn't make the puzzle included "BANG UP JOB!" (compliment for a crash test facility), "SENSATIONAL!" (a massage parlor), and "DYNAMITE!" (an explosives manufacturer). The hardest theme answer to clue was "NOT BAD AT ALL," which was first "compliment for a do-gooders club" (not sure how many of those there are) and then "compliment for the Justice League" (which seemed more of a general description and not specific to any particular world-saving activity).

The number of theme answers and their smallish size made for some fill that Will & Joel had issues with. Had we all known that this would come out a week after "The Force Awakens" opened, perhaps we could have kept DETOO and REYS. The latter was clued "Actor Fernando and others" but is now more apt as "Star Wars heroine namesakes." Incidentally, I wonder how many baby girls in 2016 will be named Rey. (Should I mention that my son's name is Luke?) I went through two edits of the fill before it was passable, making me feel in the end like I truly earned the accolades that were in this puzzle!

I think I'll treat myself to a steak.

The inspiration for this puzzle actually didn't make it into the final submitted version. I was watching The Bourne Ultimatum on TV and wondered if Matt Damon (who had sworn off the character) would ever be Bourne again. That was the catalyst: BOURNE AGAIN (Clued for the second film he did: "Matt Damon, in 2004?"). Then it was on to a quick search of characters that have had sequels, and BOND, ROCKY, and AXEL came very quickly. Various other characters made a case to be included (OCEAN, BUZZ, GOD), but I couldn't get a clever enough clue.

I almost submitted the puzzle with those four entries, but I had the nagging thought that BOURNE was the only homophone in the bunch. Cue the Sesame Street song playing in my head: "One of these things is not like the others…" Fearing a rejection, I went back to the well and came up with SOLO, which led to a very pleasing clue. And being a diehard Star Wars fan (I have faith in you, J.J. Abrams!), I was doubly pleased to include that entry.

I'm thrilled to be a newly published NY Times crossword author, after several appearances in GAMES Magazine and the LA Times. My very first puzzle, however, was a self-published one. In 2000, I doctored an issue of GAMES Magazine to include a puzzle that featured a marriage proposal to the woman I was dating. We would usually spend our lunch hour together working on the daily crossword, so it seemed an appropriate way to pop the question. I hadn't heard of Crossword Compiler at the time and did it all the old-fashioned way, laboriously developing the fill, the clues, and the layout over a three week period. Even at the new and improved NY Times pay rate, my effort probably would have only worked out to about five cents an hour, but the eventual payoff was more than worth it. We've now been married for over a decade.

The first theme answer I developed for this puzzle is still my favorite: PHONE BILBO. ("Give a hobbit a ring?") There had been a lot of buzz in Hollywood about the filming of The Hobbit: An Unexpected Journey, so I had Bilbo on the brain and set about looking for other -BO theme answers. The puzzle was accepted in June of 2012, six months before the premiere, so I wondered if its publication might coincide with the opening. Not the case, as it turned out. But thankfully, Mr. Jackson does love his trilogies, so it coincided with The Desolation of Smaug instead, making for a very memorable first publication for me. Thanks to Mr. Baggins for the idea, Mr. Shortz for the thumbs up, and Mrs. Katy Stillman for saying "Yes" thirteen years ago!