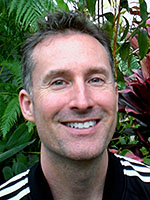 How appropriate to cross POLAR BEAR PLUNGE with PNEUMONIA! Interesting that the symmetrical crosses are related(ish) too — Seattle is FAKE MEATS central, plenty of hipsters who TAKE THE HIGH ROAD to pay an extra $5 for an Impossible patty (which is impassable for beef). Mark Rober and Bill Gates did a fascinating overview on FAKE MEATS; I'm curious how it all plays out. 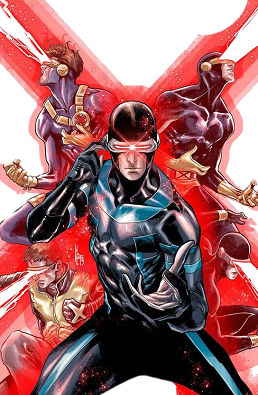 As a huge X-Men nerd, I dropped in EYE BEAM after reading [… Cyclops …]. He's not the nuanced character Wolverine is, but there's something so compelling about the two of them and their triangle with Jean Grey. (I could hear Jim Horne's eyebeams glazing over as I went on in agonizing detail.)

Brilliant clue for an already strong entry, PHONE TAG. [… when two people miss each other a lot?] Sad to have to use a question mark, but even with it, what a misdirect! I was fixated on long-distance relationships. Might have something to do with a certain lockdown ...

Jamey has a point about SPECIAL SAUCE; it might have been more fun as the colorful term for "je ne sais quoi." I'm more used to "secret sauce," though, which my MBA classmates verbally diarrheaed as much as "synergy," "measurables," and "incentivization."

I'd heard of WHAT ABOUT BOB because I like Bill Murray, but I wasn't sure if the movie has stood the test of time. Thirty years ago! Then again, I'm still a LOLCATS lover, even though I have a feeling the young catz are loling their eyes at me because of it.

Jamey did a nice job with the ever-present constructors' trade-off between color and cleanliness. The bar of 72-words is extremely high, though, so from a technical standpoint, having even a few dabs of AHL EEE LAL SRA etc. can prevent a puzzle from standing out.

I appreciate it when constructors attempt to push themeless boundaries. Recently, I've noticed an emerging trend of themelesses aiming to place most, if not all, their feature entries in the across direction. This might seem like a negligible asset, but it increases my solving pleasure. Like most Americans, I like reading left-to-right. Who cares if the Chinese are millennia wiser than we are? Their up-to-down writing style is bizarre! 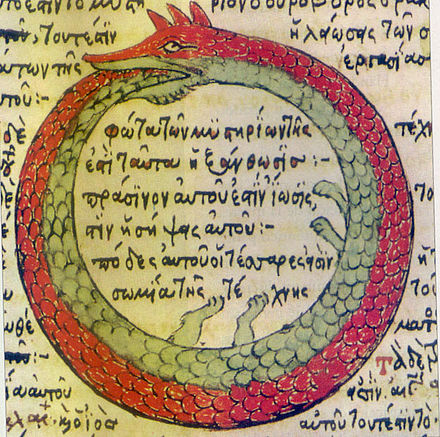 No, I'm not Chinese-American. I'm TAIWANESE-American, thank you very much.

What? Writing in Taiwan is up-to-down, too?

Ten snazzy long entries today, all ten oriented horizontally. I feel for poor suckers who have never heard the story of OUROBOROS eating its own tail, inspiring Kekule to envision the shape of the benzene ring. I'd feel even worse if those folks had to see:

Looks more like a fish blooping air bubbles than a proper name.

EVERY VOTE COUNTS, and so does every long slot. I hitched on ON THE DOLE. Hmm. An offensive term? I wasn't sure, but there are plenty of web pages denouncing the phrase as such. I'd have avoided it if I were building this puzzle.

I'd have also tried hard to avoid AMO, ITEN, UDE, ELREY. It's tough, though — when you orient so many long answers in the across direction, it's nearly inevitable to need some ugly bits to hold them together. As much as I love ILLITERATI, stacking it with TURNSTILE JUMPER / CANADA DAY / ON THE DOLE causes so many simultaneous constraints.

Overall, it didn't work as well as the last mostly-across themeless, but it did do a great job of squeezing a ton of color into the across feature entries.

Jim Horne and I often have conflicting viewpoints on entries. He's more educated, cultured, intelligent, and smells better than me, so it wasn't a total surprise that he thought LIMN and LOESSER were perfectly fine. What was surprising was that he hitched on AIDE MEMOIRE! I recognized the term but didn't know what it meant off the top — I figured it was just my boorishness at work. 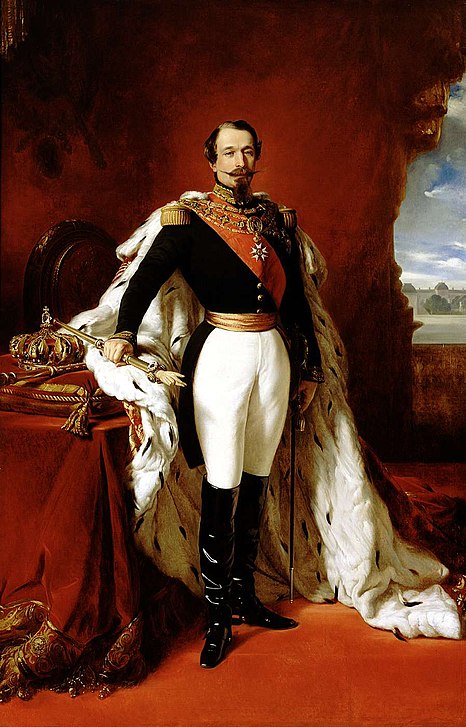 Some lovely feature entries, HAPPY CAMPER right off the bat, making me a happy camper. Enough OUTSIDE SHOT / PINK MARTINI (their music is awesome!), ATOM SMASHER, PIG LATIN, ROWING CLUB to be entertaining.

Fantastic clue for NAPOLEON III, too. Not being great on foreign presidents, I struggled mightily to recall names from the past decades. Turns I had to go a lot farther back than Sarkozy, Chirac, and de Gaulle!

I still tried to shove JACQUES CHIRAC into that slot. Ahem.

Another great one: [Will might change them]. It's an inside joke to constructors that Will Shortz changes many of the submitted clues, so this one made me laugh. Good wordplay too, as the word "will" does change (verb) TENSES.

Aside from AIDE MEMOIRE, CALORIE BOMB didn't resonate with me either. Research shows it's a valid term, but something like GUT BOMB or GUT BUSTER would have been much more colorful.

My criteria for 72-word themeless are so strict since it's the easiest of themeless construction challenges. It's tough to see any crossword glue, much less a slew of I WERE, RE-ICE, ADAS, ELD, OME, etc. Standards for the 72-word themeless have ratcheted so high over the years.

Thankfully, there was enough meat in the grid that I didn't mind the gristle that much. Nice debut puzzle, with enough color to keep me entertained.