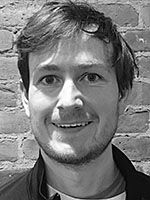 We decided to build the puzzle when Ben realized that the phrase "Netflix and chill" was 15 letters. It felt a little risqué, so we were delighted when the puzzle was ultimately accepted. Our initial construction effort, however, got off to a bad start: Ben had misconfigured our construction software such that it only offered single-word fill — no phrases!

We eventually figured out how to use computers properly, and when we were able to pair BUTT DIALED with FLIP PHONES, we knew we were onto something. We struggled a bit with the north-center — we're not particularly proud of the AREEL/AREI intersection — but we hammered away until we had something we were happy with.

Cluing the puzzle was especially fun. We each took a copy of the completed grid and, working alone, wrote up a full set clues. Then we compared clues for each entry in a series of TETE A TETES. Our cluing was helped by a simple shell script James wrote, called `cross`, which let us see all the past NYT clues for any entry we were considering (basically a worse version of this site!).

On to the next one!