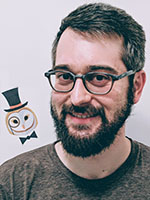 This puzzle came about as the result of a minor philosophical crisis.

I'd read a blog post where the author was complaining about a puzzle that he felt "lacked fresh fill." This complaint surprised me because I'd personally found the puzzle in question to be quite lively.

It got me wondering: what do we talk about when we talk about "fresh fill"? What separates perfectly OK workhorse words from gnarly crosswordese? Can clever cluing turn a stale word fresh? And when does a word go from "fresh" to faddish, twee, or just plain annoying?

I soon began to doubt everything I knew about cruciverbalism, and indeed, language itself.

At around the same time, I read on Language Log (a blog run by an international supergroup of academic linguists) that the American Dialect Society had recently announced "DUMPSTER FIRE" as their 2016 Word of the Year. It struck me that if there were one word everyone could agree on as "fresh," surely it'd be the ADS Word of the Year.

So I made a puzzle based on that idea.

My initial plan was to seed the past several years' winners anywhere I could fit them into a grid. But when I looked at the WotY list, I realized the word lengths might allow for symmetric placement. Luckily, I was able to pull it off.

I'm super-duper thrilled for this to be my debut puzzle in the Times. Thanks to my friends and family (especially Cliff, Nick, and the Daves Madden and Sheppard) for their support and feedback. Thanks also to Mr. Shortz for actually accepting this thing, and editing the clues to be better and more consistent overall.

My only regret is that UHF is no longer clued as [1989 "Weird Al" film set at a low-budget TV station].