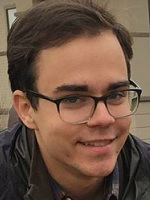 I don't have that much to say about this puzzle, except for that I'm glad the editorial team let me keep my favorite musician, Weird Al, in the clue to 59-Down. That and I'm proud of the unusual cluster of Scrabble-rich letters in 39-Down without making the Across clues obscure. Other than that, it's a pretty standard, regular old, nothing-odd-about-it Friday puzzle. Except for, I suppose, the cheeky little secret I hid in the grid. Let's just say I left my mark on this puzzle in more ways than one. You'll find it if you look down and then head east.

I love me a good tricky "change-the-path-of-an-answer" Thursday puzzle. I realize turn-the-corner puzzles might be a bit played out now, but to my knowledge I haven't yet seen a "wrinkle," so hopefully, this one is a fun twist to solvers.

When making the puzzle, I waffled over replacing 45-Across with MORTIMERSNERD instead of MORTIMERMOUSE. Both references are surprisingly equally dated (Snerd the ventriloquist dummy debuted on the radio in 1936, the same year Mortimer Mouse was introduced in the short "Mickey's Rival"), but went with the mouse because of my Disney love and also the fact that he still appears in shorts and on Mickey Mouse Clubhouse occasionally, making him a bit more accessible to younger solvers. That, plus even to a non-Disney native, it wouldn't be too hard to figure out this character might also have the surname "Mouse."

Also, every time I look at 29-Across, I can't help but read it with an annoyed British accent because of Rowan Atkinson as Zazu the hornbill in "I Just Can't Wait to be King."

I've come to learn that my good luck charm in puzzle writing is slipping in a video game reference (in the past, that's included MEGAMAN and ITSAMEMARIO). Nearly all of my accepted puzzles have had one, and a lot of my non-accepted ones didn't. Well, guess what? This one has TWO (19- and 23-Across). Don't worry, though, they're pretty accessible. Even the luddites of the world shouldn't have a problem in that area, I hope.

I believe that crosswords are a place to celebrate the language we use, so I always relish the chance to put in words and phrases and cultural references that have meaning in my own life, and if someone completes the puzzle but didn't know them, well then hey! They've now learned about something!

I wasn't sure about this puzzle's chances making it through Will Shortz's "to be considered" stack, especially since I'll admit that the grid layout isn't exactly elegant. But I think what did it was the breadth of interesting longer entries that the Crossword Gods allowed me to fit together, from my favorite wrestling hold at 47-Across, to a fun regional phrase to say at 15-Down (try it as a minced oath, it's great!), to an iconic piece of animation history at 10-Down (another one of my lifelong interests). That plus a few fun "Question Mark" clues (always my favorite to write and solve), such as mine unaltered at 46-Across, mine tweaked slightly at 42-Across, and a very clever one supplied by the editing team at 40-Across, make this hopefully a enjoyable puzzle for everyone to chew through.

I also always love sticking in at least one "fact clue," like the one at 30-Across, which you'll hopefully write in and say, "Huh! I never knew that!" In my mind, that's one of the greatest joys in puzzling.

When I first submitted this blurb, I did it for the wrong puzzle. I completely forgot this puzzle had been accepted, so it was a very pleasant surprise to see it on the docket. It has several clues I'm proud of, such as the fun back-and-forth pairing at 32-Across and 33-Across, the simple wordplay of 53-Across, and the enigmatic misdirect at 52-Down.

I also just finished a six-week run acting in a production of "Matilda," which was a fabulous production full of talented and hilarious people, so it was funny that my past self somehow had the foresight to make a nod to that wonderful story in the clue to 57-Across, when I wrote that clue months ago. Or maybe Will Shortz tweaked the clue to mention the story, I don't remember. Either way is nice.

Finally, the blurb I wrote for the other puzzle talked about a connection to a Disney song lyric, just like 46-Across here. I'd say that's a funny coincidence, but anyone who knows me well enough, and has heard me belt out the entirety of the Little Mermaid's "Under the Sea" probably wouldn't be surprised.

As you may imagine, I had to remake this grid a few times until I got something remotely satisfying, as it's a bit difficult to fit five different Q's into a puzzle seamlessly. I also considered adding something along the lines of "IF IT AIN'T BAROQUE," or "GO FOR BAROQUE," but that felt too played out already. I also hoped I could fit the word "BISQUE" in somewhere because it's such a fun word, but there's no real homophonic counterpart that I could find, alas.

In making this puzzle, I was astounded to find that there are no popular, universally-known movies with "SPORT" in the title — despite how many there are about that particular subject! I thought it would be a cinch to turn "SPORT" into "sUPport," but in the end I had to give up on that dream. I considered the Jean-Claude Van Damme cult classic "Bloodsport" for a little bit, but I figured that was too niche. I also dearly wanted to fit "ALIEN" into "cALIENte" somehow, but that "CTE" string proved too uncommon, and the universe did not see fit to grant me that gift. That's what comes with making a puzzle with such a specific gimmick--your options are surprisingly limited. In the end, though, thanks to hours sifting through "Top 100 Movies" lists, I'm pretty happy with what I was able to find.

Will had me remake the lower-left corner, which resulted in me including my favorite longer answer at 94-Down. Hasn't everyone shared a hotel room with someone that sounded like a lumberjack going to work at 2:00 am? And while I didn't clue it as such, every time I look at 57-Down, my mind immediately follows it with "Rock you like a hurricane!"

When my last puzzle was published, I went onto the comments section of the Wordplay blog as I'm sure many new constructors do. I was pleasantly surprised at the positive responses from people — despite a few minor nitpicks, most people loved it!

However, there was one woman who seemed to hate my puzzle with a fiery passion. She insulted me directly, saying she had been doing the NYT puzzle for 60 or so years and was disgusted by what it had turned out to be. She slammed my use of "you know it or you don't" clues, implying I wasn't "man" enough to include clues based solely on wordplay alone. My response to her is, I'm sorry my puzzle made you feel that way. I genuinely am. Despite all that, I'm still proud of it.

I believe that the New York Times Crossword exists as a reflection of the English language — of how people speak in this day and age. I'm sorry if you wish there were more "scholarly" clues and words, with only dictionary definitions, but people in real life use slang and they talk about movies, and they use brand names. The crossword is a reflection of the world as it is. And it's always used clues that you either know or you don't! I don't know the names of obscure Czech composers or minor characters from "Leave it to Beaver." But I'm happy to find things I don't know and learn them! So you don't have to do my puzzle today, because yes, there's another video game reference in it. There are plenty of old puzzle compilation books from decades past that are still good. But if you're willing to give this puzzle a try, maybe you'll learn something about the things in my world!

I am very proud of today's puzzle. It's seemingly become a good-luck charm of mine to include a video game clue (like the classic 32-Across — how can you not say it in his voice?). I'm also proud of the pun clues sprinkled throughout, and the inclusion of what I think is the funniest food (31-Across. I don't know why). I made the grid, and the first thing my program suggested was that center circle in its entirety. I was astounded at how easy it was, and I just went from there.

I don't remember where the idea for today's theme came from. Possibly from my frustration with a few other gimmicky themes I'd been working on that had constraining requirements for theme answers. All that I had to do for this one was find phrases that contained "AD," which is a far from uncommon combo, and made it possible to include some interesting answers. I've wanted to put "ADULTING" into a crossword for ages, because it's a modern slang-y word not much used outside millennial subculture, but that I think we can all relate to (it's pretty hard to do!).

As a huge nerd, I'm always excited to sneak a video game reference into a crossword (a true classic with great music--MEGAMAN!). If you want a great workout song, look up "Mega Man 2 - Dr. Wily's Castle"--which is one of the best video game songs of all time in my mind.

This is my second puzzle in the NYT with a third on the way, and I'm just realizing that each one has a gaming clue, so maybe that's my lucky charm. Video games aren't the most easy-to-access knowledge base for many crossword puzzlers, but I also see crosswords as a sort of educational collection of human culture and knowledge, so the chance to educate anybody a little bit about something I care about is exciting. That alongside including an answer that's never been in the Times puzzles before (NERDS ROPE, a candy I sold to kids all summer in the snack shack at camp) is pretty cool, too.

I also wonder if POPUP will confuse anybody. It seems like it would be related to the theme, but it isn't. Hopefully, some people will appreciate the little red herring.

Dealing with movie/book/television spoilers is always a dicey subject. For this puzzle, I wanted to only fill the grid with twist endings that 99% of puzzle solvers will either already know, or won't care about getting spoiled. If you haven't seen "Citizen Kane" yet, you're probably resigned to not seeing it with fresh eyes. It would have been cruel to have clues like "[BLANK] dies in Game of Thrones," because I imagine the NYT offices would have been immediately stormed by upset fans. That's also why I was determined to split the clues up into two answers, so that simply reading the clue wouldn't spoil the fun. A bit hypocritical, I know.

I'd like to thank Jeff and his fantastic website for making it possible for me to create quality puzzles. I want to thank my mom and my family for giving me a love of puzzles to begin with, and I want to thank the Academy for nominating me for this award. (The ironic thing is—I've only actually seen two of the six movies in this puzzle. And yet, like everyone else, I know the endings to all of them.)