The constructors' eternal trade-off is snazziness vs. smoothness. Almost all of us want to work fantastic entries into our themeless, of the LASER TAG, BAD KARMA, HAVE A COW, GEEK CHIC type. Lovely phrases. Most of us would also get satisfaction out of weaving in GEE WHIZ, SQUIBS, TOY CAR, YOWZAH, too — great use of slots that too often contain neutral filler. 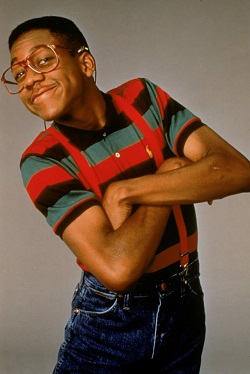 But almost all of us would also like to avoid the gluey bits that are so helpful in holding a grid together. ITEA, A BEAT, SSR, EAN, ON ME, VTEN, DREWS, etc. are so handy, but so inelegant. (Not to mention, the oddballs like SEINED.) As a solver, more than roughly five of these uglies and my enjoyment level falls off exponentially.

It's tough to balance these two opposing forces, and every constructor has a different balance point. For me, that falloff in enjoyment is so steep that I work hard to keep it to maybe three or four dabs of glue at most.

Sometimes I wonder if I'm mired too deep into construction to enjoy puzzles as much as I used to. Like I mentioned to Jim a week ago, I LURVED Harry Potter the first three (okay, five) times I read the series. But after reading critical analyses, I started noticing every unnecessary adverb Rowling employed — they were everywhere! Although my fourth (six) reading of the books was still enjoyable, it diminished because I kept on picking those up.

Six strong answers form the center of today's grid. GALAXY QUEST was surprisingly entertaining (as was Tim Allen), and NATO MEMBERS / HIP HOP music give a good diversity of entries — a little something for everyone. I was only vaguely familiar with LILY MUNSTER, but I bet the older solving crowd will delight in seeing one of the title "The Munsters" characters highlighted. Thank goodness every one of the LILY crosses was easy to suss out. 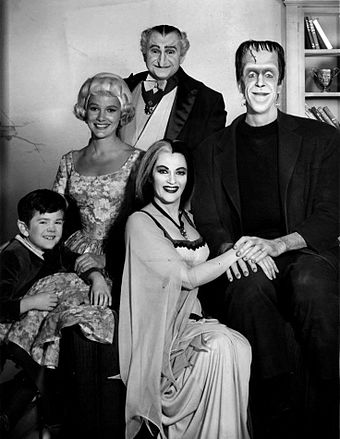 Well, except the second L. I sweated — LILY was the only real-sounding name, but SUL surely had to be wrong. SUD or SUR, right? Could LIRY or LIDY actually be some monster/Munster-sounding name? Turns out SUL is Portuguese for south. Yikes. I think it's fine to expect NYT solvers to have basic knowledge of foreign languages, but more at the level of AMI or UNO or at least words that can be figured out through etymology.

Great grid flow. Each corner has so many ways into it. The downside of this arrangement is that it's really tough to construct — getting sections to smoothly merge while still incorporating colorful answers is tough. I like the SW corner, with HAN SOLO given a modern clue (thank goodness I just saw the movie!) and NINE IRON getting a fun clue for golfers. (A pitch is a golf shot requiring high loft.) I was so sure the latter had to be some sales or baseball term, so I got a nice a-ha.

Other corners had some rough spots. IN SONG feels like a disguised partial to me. When would you ever use it without "break out"? Speaking of break out, IN STIR … in THE stir, yeah? Apparently it's more common in specific parts of the country?

And A GRIP / ZOT is interesting. As much as I find partials to be inelegant, at least ["Get ___"] gives a challenge. (Get a room, get a life.) ZOT is such a giveaway (for those who read B.C.) — it's what Stan Newman might call "unStumperable," i.e. he might avoid it because there's no way to clue it such that it provides any challenge.

Neat center of the puzzle and great grid flow, with a couple of shorter entries I hitched on.

What an incredibly tough solve today. It's great to have a variety of difficulty within Saturday puzzles, but this one kicked my butt down the street, stuffed grass in my mouth, and asked me why I was hitting myself. Looking at the finished grid (I had to reveal some answers to finish), there's a lot of entries to love here, RIP-SNORTER and GUNSLINGER being my favorites. Talk about awesome in-the-language phrases! LETS PARTY crossing JUST PEACHY was another highlight.

The snakiness of the grid makes it a bit like the serpentine brownie pans where each brownie has some edges to it (I'm an edge man). It's visually attractive, but it does cause some segmentation which happened to interfere with my solving experience. I punched through the middle section, but that left me with the NW and SE as separate blank spaces, two mini-puzzles that didn't have many ways to get in. That's totally fine and within crossword rules, but I personally tend to prefer puzzles with a lot of interconnect; multiple ways of getting into each area.

Oh, the NW corner, stumper of stumpers. It certainly contains some great entries. That stack of JUMBO FRIES, ONION RINGS, and GUNSLINGER is a great triplet. But it does come at the price of SMA, MINA, INGE, EGER, SSR, which feels like a heavy price to pay, especially considering they're all composed of mostly high-frequency letters (RSTLN E). And when you throw in the tough cluing, it was all but unsolvable for me. Had to throw in the towel for the first time in ages.

In comparison, I really enjoyed the middle (diagonal) section. Even though it didn't have quite the quantity of marquee answers, I found the experience much smoother (only BARI and SRTA as hiccups) and more pleasurable. I'm sure there will be solvers who prefer the crunchiness of the NW though.

Been a while since I've been stumped so badly. Good lesson in humility; a reminder that I still have a long ways to go to become a top-notch solver. I look forward to the ride ahead.

Excellent use of snazzy 7's today. When I was a kid, the letter J fascinated me, and anyone named Jeff was immediately interesting. Since there was no President named Jeff (just you wait until I get elected though*) Thomas Jefferson became my go-to favorite. So uncovering JUJITSU and JAZZ AGE across the top gave me a great first impression.

I personally find it difficult to construct themeless grids loaded with mid-length answers (length = 5-7) because it's so much easier for me to come up with strong 8's, 9's, and 10's. Multiple-word answers are often much better to my ear than single-word answers, and longer length facilitates that. Don't get me wrong, I like CEZANNE for its Scrabbly goodness and the impressions he makes (groaner pun intended) and JAKARTA / ZANZIBAR make for a great geographic pair. But I prefer more of the FAST CAR, ATE DIRT, GUESS SO kind of stuff over RANKLES, ELATION, EPSTEIN. Poor Arnold Horshack and Vinnie Barbarino, they get no respect compared to the common-lettered EPSTEIN.

Definite bonus points for the Scrabbly goodness all over. That double-J combination in the NW really constrains things, and Frederick does well to fill that corner relatively cleanly. ULALUME is probably much more crossword-famous than famous-famous, but that's okay. Any Poe work ought to be fair game for the NYT crossword.

As I tell my friends who say that they can't do crosswords, a lot of it is just putting in time and practice (don't forget enjoying it while you do!). Even a year ago I would have had a blind guess at the SPICA/LITA crossing, but something in the back of my head tingled, telling me that SPICA was "more of a word" than SPACA, SPECA or SPOCA. Call it crossword intuition, call it spidey-sense, or call it itchy head, but I call it the sweet scratch of success.

*I promise to break every law of physics during my administration

An excellent puzzle, one that would have earned the vaunted POW! (Puzzle of the Week) if Ian's themeless hadn't run yesterday. Note the fine execution of the near triple-stacks (17A/20A/22A and 42A/51A/53A). Often triple-stacks contain an ugly or a blah 15-letter entry, but Frederick gives us six long entries that would each qualify (in my book) as a marquee answer. Impressive feat.

Solvers will also typically complain that triple-stacks force ugly crossing answers. That definitely can be true, since a triple-stack requires 15 sets of parallel constraints, but Frederick does it admirably here. The top one is especially nice, with not a clunker in there. OF TEA and A RUDE in the bottom half are perfectly acceptable, but they're not ideal. I didn't know GELEE, but was interested to learn what it was.

Will gets more themeless submissions than any other type, so we as constructors have to up our game to get serious consideration for a themeless acceptance. A small number of subpar entries (esoteric, partials, abbreviations, etc.) can be cause for rejection, and even a single poor entry can nix a puzzle. Given this fact, getting enough "sparkly" answers is a tough feat to accomplish. By my estimate, a themeless puzzle needs at least 10 of them to even be in the running these days.

If you have time, you might consider browsing older "Pre-Shortzian" themeless puzzles (thanks to David Steinberg for leading the "litzing" efforts) available on xwordinfo. Amazing to see how much cleaner and more interesting themeless puzzles are these days.