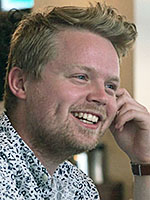 Jim here, sitting in for Jeff Chen, who is practicing for his mellophone recital.

["Macbeth," but not "Hamlet"] is one of my favorite clues of the year. Note the quotes. "Hamlet" stresses the first syllable, so it's a trochee. "Macbeth" stresses the second, so it's an IAMB — that thing where, when you string five of them together, you get iambic pentameter. At that point, you're basically Shakespeare.

For this fine crossword, I will now explain
The bonus theme and all that it entails.

Today, we take well-known movie titles and add an extra letter (a "bonus", I suppose) to fit the goofy clue. Beverly Hills Cop becomes a "Rodeo Drive uprising" when we add a U to turn COP into COUP. By now, we're conditioned to expect a bonus layer in add-a-letter puzzles. We highlighted the bonus letters and, reading top to bottom, they spell OUTTAKES which are often included in movie bonus features.

I play in a Hamilton tribute band so LIN-MANUEL MIRANDA is a big part of my life, but I wasn't expecting to see that name in a daily puzzle. It's 16-letters long. Finn Vigeland didn't care, making room for ZOMBIE APOCALYPSE too. Bravo.

Fans of Hamilton or Harry Potter and the Cursed Child may disagree but I still insist that Wagner's Der Ring des Nibelungen (the so-called Ring Cycle) is the greatest theatrical work you can ever experience. It forever changed music and drama in fundamental ways and is still a huge influence on everything from visual art to movie scores. Whatever you might think of opera, see it at least once in your life.

This is my favorite puzzle of the week.

Rebus squares are read WATER across and HHO (i.e., H2O) down.

This is another debut from a teenage constructor. Mr. Vigeland constructed this puzzle while a student at Horace Mann School in Bronx, NY (hence 58 Across.) At publication time, he was an 18-year-old freshman at Columbia University.

There are 15 M's tying the record for most in the Shortz era.