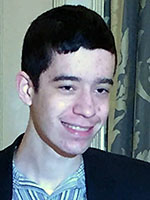 You don't know ze difference between MACAROONS and MACARONS? Pah! (Said in a snooty French accent.)

Fun experience working with Ezra. He approached me with the idea of using DOUBLE BLIND as a revealer, and it immediately struck me as having huge potential for something interesting. Ezra's original concept for how to play on it didn't grab me, though, so thus began the long brainstorming process.

Once we hit upon the idea of having two sets of doubles within a single themer, it started picking up steam. But that didn't seem like enough. Skipping random pairs of doubled letters is okay, but it would seem much more deliberate if the letters were chosen for some purpose, not just whatever worked.

Off we went down internet rabbit holes, thesaurus.com and onelook.com my best friends (and worst enemies). But once I happened upon CLONES as a possibility, things began to click. Several (dozen) hours of coding, scouring, and struggling to match crossword lengths finally turned up our set.

Then it was just — "just," ha — a matter of filling the grid so that it looked like a perfectly normal crossword, except that those 12 special squares would be omitted. That might sound daunting, but it's not so bad. Just a lot of trial and error. Except for that pesky UNDONE / UDON middle region. That was an enormous pain.

And wait! Ezra pointed out that we shouldn't have any other doubled letters in the grid. Good point — er, god point. That seems like it should be easy enough a constraint, right?

Sigh. That eliminated some of the most promising ways to fill each little section. Who knew, an innocent EE here, an overlooked OO there, and JEFF AND EZRA SMASH.

And the one crossing entry I thought would be no prob? The MACAROONS slot. Surely there were plenty of words that became other words when one O was removed.

Overall, a lot of pain, a ton of rework, and dozens of hours sunk in. I'm hopeful our focus on the solving experience translates into smiles today. Sometimes I wonder if tricky puzzles like this are fantastic for a niche group of solvers, but leave everyone else confused / annoyed / calling me a macaroon.