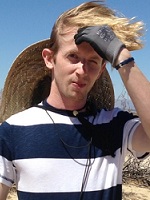 I work on and sometimes appear in the television show "Comedy Bang! Bang!" on IFC. I have the stop-start nature of TV production to thank for my New York Times debut — this puzzle was created in between seasons two and three of the show. In the past few years, it has been a total joy to have gotten to work on so many labors of love and see them at completion.

The idea for this puzzle came from watching a player spotlight package during ESPN's coverage of the World Series of Poker. "I Knew You When" was in my head probably only because it's the title of a "Friday Night Lights" episode.