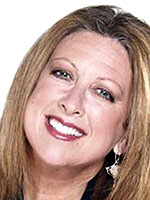 Funny "modern-day remake" theme, classic movies updated using current businesses. It took me forever to figure out what was going on, but then UBER DRIVER (from TAXI DRIVER) gave me a smile.

I wasn't sure what THE ___ DICK was (I really hope they use that as a "Family Feud" survey), but apparently there's a movie called "The Bank Dick"? And Bing Crosby was in … "Holiday Inn"? Huh. Funny, that movie was just in 1979, so I feel like I should know it. Ah well.

I spent a lot of time ruminating on the revealer, GMO POPCORN. Was that supposed to be a remake of some sort of ___ POPCORN phrase? Would have been a clever ending to the puzzle, but alas, I think it's more a "what could we do with POPCORN that sounds modern-day?".

I like in these celeb collaborations when the grid reflects the celeb's life. Love getting SLAY, as Elayne Boosler cracks me up. It would have been neat to turn YAKS into YUKS. But that stupid terminal U would have made 57-Down much less flexible. Drat!

Along the humor line, I smiled at the FIREPLUG clue. If you don't get it, think not about the golf dogleg, but an actual dog's leg … up to the left or right … above a fire hydrant … (sorry, I'm in the habit of having to explain jokes in excruciating detail to my two-year-old).

Pretty good grid, as I'd expect from Patrick, except for one little problematic crossing — UNIVAC / PIMA. Oof. Even for a Wednesday puzzle, I wonder if that's going to give solvers fits. I'm personally interested in tech, so UNIVAC and ENIAC are fascinating to me. PIMA … not so much. Hopefully, solvers will fall into at least one area of interest or the other.

Love the celeb collaboration series, but this theme didn't quite hit home for me. If GMO POPCORN had been replaced with a fourth themer, maybe something involving GOOGLE or AMAZON or something, that would have worked better for me.

(EGBDF = every good boy does fine, a mnemonic for the notes on the lines on a treble clef score.)