49 puzzles by Doug Peterson
with Will Shortz comments 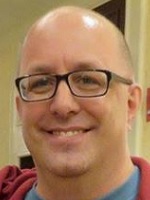 She and Brendan competed at the 22nd Westchester Crossword Puzzle Tournament. The contest included Doug's crossword as the playoff puzzle conducted on the large boards. Since it was Amanda's idea to take part in the contest, she had no idea that Brendan was going to propose.

When the round was over, I explained the theme to everyone ... and announced that Doug had made the puzzle at the request of someone named Brendan.

At that point, Brendan walked to the front, expressed his feelings for Amanda in a beautiful way, and got down on one knee and proposed. She said yes!

Samuel A. Donaldson is a law professor, specializing in taxes and estates, at Georgia State University in Atlanta. Doug Peterson is a professional crossword constructor in Pasadena, Calif. They met at the 2008 American Crossword Puzzle Tournament, became friends and started making puzzles together — working back and forth by email. Doug attended Sam's wedding in 2012. They are prolific contributors both individually and with others.

Mangesh Ghogre, of Mumbai, India, is making his debut with today's puzzle. How he and Doug divided up the construction job I don't know. The two pairs of stacked 15s are pretty nice, I think, although three of the four 15s have appeared in Times puzzles before (17A once, 48A twice, and 45A three times). But it's been awhile since they've appeared, and the clues for them are fresh, so I hope solvers will not remember them or at least not mind.

This is another lovely, clean construction from Brad and Doug. Most of the clues are theirs, too.