21 puzzles by David Kwong
with Will Shortz comments 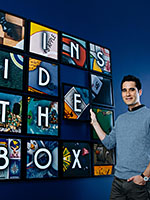 David Kwong is a magician and crossword constructor in Los Angeles who regularly combines puzzles and sleight of hand in his performances. His 2014 TED Talk includes a trick with a New York Times crossword and has been viewed 1.7 million times to date. David has a new virtual show with puzzles, titled Inside the Box, opening in a few weeks with the Geffen Playhouse in L.A.

This puzzle is his 21st crossword for The Times.

David Kwong is a professional magician and crossword constructor. He was the head magic consultant for the hit 2013 film Now You See Me (see the sly nod at 96-Down.) He is currently performing in a one-man magic-and-puzzles show, The Enigmatist, in New York City. Audience members must solve four puzzles in an anteroom to get into the show. (Hints are available if needed.)

This is Kwong's 19th puzzle for The Times.

This is probably my favorite daily puzzle of the week. The trick at 65A is downright mean!