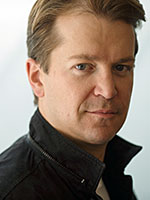 Daniel Okulitch, originally from Calgary, Alberta, is a professional opera singer of more than 25 years. He has performed for the New York City Opera, Los Angeles Opera, Teatro Colón in Buenos Aires, and many other venues. He completed a run of shows at the Bolshoi Theater in Moscow as the title character in Mozart's "Don Giovanni."