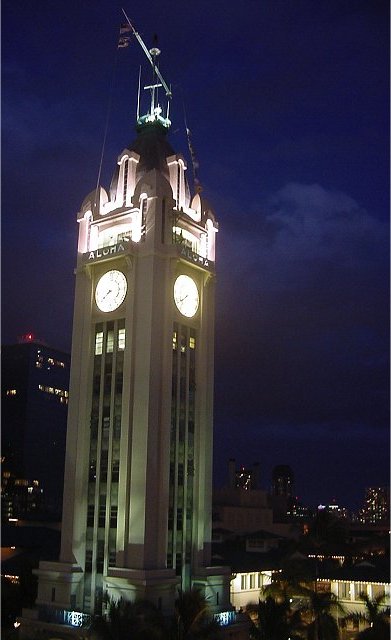 I enjoy when constructors can place related entries within the same stack. Having a BAHAMA MAMA at the ALOHA TOWER? I don't know what's in a BAHAMA MAMA, but what a lovely tropical image it all evokes (especially after last week's eight inches of snow here in Seattle.)

A lot of long slots in this grid design — 16 (!) of 8+ letters. Daniel did well in his conversion rate, most all of these long entries good to great. Freshness in PROM DRESS, DIETARY LAW, ADDED SUGAR. And I appreciated that there wasn't anything that made me feel out of the loop, old, or just plain stupid. I like that Daniel aimed for broad appeal.

Out of the 16 slots, I counted only three that were just so-so: OVERTURE, EPISODES, SNAP OPEN. The first is debatable, maybe elating some classical music buffs. Perhaps EPISODES could have been elevated to asset-land with a clever clue, but [Installments] didn't do anything for it. And the last — tough to get excited about a +short word like OPEN, OUT, AT, etc. phrase.

So you're probably asking, 13 of 16 long slots converted into assets, not that much crossword glue (ERLE RPI EOSIN) — why not a POW!?

Short answer is because I'm annoying.

But overall, it's a strong offering. I bet if Daniel had figured out a way to get rid of ATHWART or EOSIN — easier said than done — I'd have put it in the POW! running.

I've enjoyed corresponding with Daniel. He keeps on calling me "Mr. Chen," which I find infinitely amusing. Sort of like Marcy calling Peppermint Patty "sir." I've appreciated how polite he is with his inquiries, taking care to never infringe too much on my time, so it's a pleasure to see him make his debut.

That SE triple-stack is a beaut. GREAT DIVIDE is a great entry in its own right. GAY MARRIAGE, love it! And the common SEE ATTACHED rounds it out. I'm not a fan of DR T, who doesn't feel crossworthy, or BRAE, which is a bit of an odd word, but those were well worth the price of admission into that corner.

DEMO TAPE was a perfect example of clever cluing hitting the mark. The question mark in [Rock sample?] gave away part of the game, but I still enjoyed the repurposing of a common phrase into a completely different meaning.

There are a couple of shorties I debated internally. LYSIS is common enough in biology, something I heard all the time in my second career (in pharma). Clued as a suffix, it's definitely gluey. But as a scientific word? Hmm. Still probably esoteric for most. EGEST is similar.