Dan got in touch with me more than a year ago, pitching [Dock-u-drama?] = ON THE WATERFRONT. I thought it could be a fun idea if he could find more entries in this vein. I thought it would be better to disguise it as [Docudrama?] so it wouldn't be overt. Either way, it's a pun I've never thought of, and that counts for a lot. 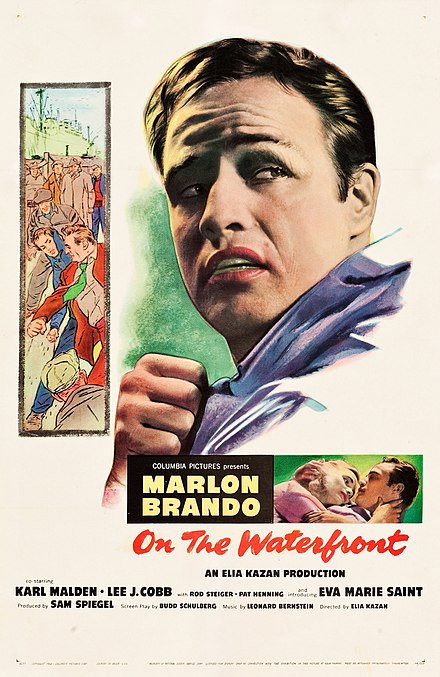 I would not have greenlighted the set Dan turned in today because:

It would have been interesting to work with Dan to tear the concept down to the studs and rebuild.

I liked Dan's gridwork better than the theme, thankfully. Not award-nominated, but when you can escape a 21x21 140-word puzzle with an average number of gluey bits (I counted 15), that's reasonable. More importantly, most of it was of the minor-offender-variety; things that solvers can easily figure out, like ATA, EES, ONOR, OSAY, RTES.

Throw in some bonuses like UTTER ROT and AGE LIMIT, along with a couple of clever clues — STETSON as "ranch dressing" and "Wear off?" as DISROBE — and it's a workable construction job.

It's a shame that this theme didn't get more pushback for further brainstorming. I'd love to see Will Shortz develop a better Sunday process, connecting people who have raw seed ideas with a specialized group of Sunday constructors.

Four lines of equines, featuring MULE, PONY, ASS, HORSE. If my horse-loving niece only did crosswords …

Two great phrases in STUBBORN AS A MULE and ONE TRICK PONY. I'd happily use both of these snazzy entries in a themeless. ON ONES HIGH HORSE is good too, although these ONE/ONES phrases tend to sound stilted to my ear.

THE LAW IS A ASS … whoa! I'm not used to pausing while solving Monday puzzles, but I was sure I had something wrong when I saw the SAASS string. Yikes! It is true that this is the direct line from Dickens, complete with grammatical error. I can't decide if I love the entry for its sheer weirdness, or hate it for how tough it made what's supposed to be an easy-breezy puzzle.

I do like learning a thing or two from a crossword though, and this is a neat bit of trivia I'll file away. Thank goodness BEANTOWN and ISIAH made for easy crossing answers! Even if you didn't know one or both, it'd be hard to argue that there are better letters to fit those crossings.

BEANTOWN VITTLES (lobster rolls, yum!), some TOOTSIE KARMA too. Not bad in terms of bonuses. DO BATTLE felt like a missed opportunity, though — it's a fine phrase, but not as colorful as I'd like for that precious slot.

Not that bad in terms of crossword glue, either. TAVI, ASSN, ALOG, ERGS, HTS — thankfully they're all minor, and easy to figure out. BERM was the only one that stuck in my craw — I don't expect novice solvers to know the term for a "road shoulder." It does make for a rough crossing for West Coasters — SEANTOWN or MEANTOWN or LEANTOWN might seem just as fine — but ultimately, BEANTOWN is a prevalent enough nickname that the crossing is okay in my book.

Overall, a fine, straightforward Monday theme. I would have liked more sizzle and smoothness in the execution, to help the puzzle stand out more, though.

Neat idea, BOY MEETS GIRL interpreted as "famous men with a last name that's also a girl's name." RAUL JULIA is perfect, as JULIA is a common enough girl's name. CRYSTAL didn't come immediately to me as a girl's name, but of course there's CRYSTAL Gayle, the country singer.

CANDY … this one didn't work for me. I tried to find a good example of a famous woman named Candy, but Wikipedia failed me. Who knows, maybe there'll be a surge in girls getting named CANDY in the future? ADDED NOTE: Nancy Shack points out that CANDY Spelling, widow of Aaron Spelling and mother of Tori Spelling, should qualify based on her media exposure.

It would have been nice to get one other strong themer. Any one that Dan mentioned would added a ton of impact to the puzzle.

With just four themers — and two of them being only nine letters — I expect a super-clean grid, packed with jazzy long fill. I did like the bonuses of TINY TIM, BERSERK, even OBSTACLE, as I'm a big "American Ninja Warrior" fan. Pretty darn good in that regard.

AMATOL and BERNE, though. Hmm. Chemistry was one of my favorite subjects in school, but AMATOL feels pretty reachy, especially for what's supposed to be a puzzle that could attract novices. And the French spelling of Bern was odd, too.

I could have let those two slide, but then I ran into the ARTY ("artsy" feels more in-the-language to me) / CARO (tough foreign word) section. It may seem nit-picky to point these things out, but for a grid with not that much theme constraints, the grid ought to be silky smooth.

Here's an interesting constructor's dilemma: you can either 1.) have a long bonus entry in OBSTACLE, or you can 2.) shift the black squares above AMAJ one column to the left, which lets the NE corner connect better to the rest of the puzzle. Which is better?

Not sure of the right answer, but I would have tried the second option, along with rejiggering the black squares in the middle of the puzzle so that the solver would still get a long bonus down (one column to the right of OBSTACLE). I think that would have worked, given the lowish theme density.

Overall, a fun, fresh concept, always appreciated on a Monday. But it did feel thin, needing at least one more strong theme example, preferably two.

Debut! I really appreciated the novel theme today, one I wouldn't usually expect from a Monday puzzle. After solving, I had to reread the theme clues to figure out what was going on. "Hip-hop" song had nothing to do with the hip-hop genre, but referred to a WHITE RABBIT which actually hip-hops. Fun! Same went for "Rap" song leading to KNOCK ON WOOD. Rap = knock, get it? I really liked the innovation; well done Dan!

With many debut authors, we tend to get pretty straightforward constructions, with few to no longer fill entries. Not today! Dan could have easily broken up UNBROKEN or iced ICED TEA so kudos for making my Monday solve snazzier than expected. I really liked IT IS SAID and even REDCAPS — so much good stuff packed in!

It didn't come totally without a price, but the glue entries were manageable. I personally dislike partials, only random Roman numerals being worse for me. Totally a personal preference (note though that Rich Norris over at the LAT has changed his standards to a max of two partials in a 15x grid). So seeing AT ME next to IT NO wasn't great. And OLA always feels a bit wonky to me, as does the shouldn't-be-gridworthy Robert ILER. LET UP crossing SUN UP was a little inelegant, too. Some compromises, but all in all, well worth it to get so much good long fill.

Let's take a peek at the NE and SW corners, 6x3 chunks. Typically we see constructors working with 5x3 or 4x3 chunks in those areas, because they're much easier to fill. So why might Dan give himself this challenge? Well, a puzzle with four 11-letter themers must often call upon this difficult layout. Here's why: Dan spaces his themers perfectly, allowing two or three rows in between adjacent ones. But if that block of three black squares (under the OOD of KNOCK ON WOOD) was shifted to above the OOD, that NE corner would be almost sectioned off from the rest of the puzzle. A 4x3 chunk, quasi-isolated is no good, choking off a solver's feng shui. So although harder to work with, this 6x3 arrangement is much better from a grid flow standpoint.

And I appreciate that Dan took the time and care to make those big corners smooth. There's really nothing objectionable in either NE or SW, and he even gives us MACAWS in the SW. Very nice, professionally done.

Looking forward to more from Dan!