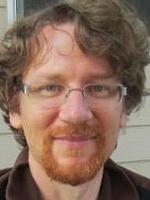 I'd like to dedicate this puzzle to Matt Ginsberg, Wei-Hwa Huang, and all my fellow word-rankers. Thanks!

I have no qualms about having computer assistance with filling grids; this crossword is an extreme example. Unlike most constrained-letter crosswords (that simply require creating a sublist, then using standard software), this puzzle presented a tougher problem: it would need 10 sublists, and then a program that could select which sublist to use based on the position of the slot being filled. So, it was a good excuse to write my own grid-filler.

Even after my program was functional, it was still nearly impossible to find worthwhile fill. I became convinced the theme had to be A, E, I, O, U, and sometimes Y. Finally, after days of searching, I had hashed out a reasonable grid and sent it off to Will. Luckily, Will liked the idea, but, unluckily, he did not like the Ys. It was a dark day when it became clear I would have to either give up, or start fresh.

After mourning my old grid, I went back to basics with black-square placement. I analyzed the word-length distributions on each of the 10 sublists. After examining lots of old Monday grids, I settled on the diagonal band through the middle. A band going NE to SW was preferable because letters occur in the same position (beginning, middle, or end) in the Across and Down words.

Filling proceeded over many iterations: Adjust starting position… tweak minimum word score…. blacklist a word…. nudge a cheater square… I would get a promising fill, then rip out the entire eastern half and re-fill… rip out the northern half … rip out the western half...

Eventually, I was happy enough to send it off, and now I hope you're enjoying the result!

This theme started out with the optimist's (pessimist's) phrase "The glass is half full (empty)." I wanted to make a Schrödinger puzzle out of that idea, but of course FULL and EMPTY are different lengths, so that pretty much torpedoed that idea. But the phrase stuck in my head for a while until it turned into THE GLASS IS FU. (A phrase that didn't make it into my submitted version of the crossword, although I would've liked it to. A bit too risqué, perhaps!)

The fill for this 74-worder just fell into place very cleanly. I was happy, since that almost never happens. Moreover, I managed to sneak FUNNY FARM into the grid, which is the name of my son's awesome preschool. (I don't think the clue "Best preschool in the world" would've made the cut, sadly.)

I had been knocking around the idea of having some theme answers "override" others for quite awhile before I came up with the idea of using famous matchups from history and popular culture. At first, I just thought the "winner" of the battle would claim the square and that would be that. But then there would be no rhyme or reason to where the opponents would cross. So the idea of using the winning — and losing — letters to spell something meaningful came to me.

My first try was the pair CHAMP/LOSER in a 15x15 grid, but it turned out that was too small to accommodate that much theme material. (Not to mention, I didn't really feel comfortable calling GM Kasparov a "loser.") So I turned to a 21x21 grid.

The grid was terrible to create (just ask my wife) since the theme pairs had to cross in exact spots, the pairs in a given order, and the non-matching length themers had to fit into a symmetric grid. Only two of the "cheater" black squares in the grid are really cheaters; the rest were necessitated by fitting the theme entries. Once the theme entries were placed, there was almost no choice for where the rest of the black squares could go without chopping into the non-symmetrically placed themers.

Filling a grid with such constraints was truly a, um, battle. The struggle was real, but I'm very happy to be in the, uh, winner's circle, with my first Sunday in the NYT! And though my original title ("Clash of the Typos") was defeated, my favorite clue (67-Across) did survive the editorial process! Victory lap!

My 4-year-old son is very into earthquakes and volcanos. Always on the lookout for crossword theme, I was idly counting letters in the book we were reading and was excited to discover that SAN ANDREAS FAULT was 15 letters. It wasn't long after that that this radical theme occurred to me. I'll leave it to the reader's imagination how the puzzle was constructed (hint: it wasn't too bad).

Because the theme affects so much of the puzzle, I tried to make both the entries and cluing easier than you would expect for a Thursday. I expect I undershot the mark, and Will has made some of the clues more difficult.