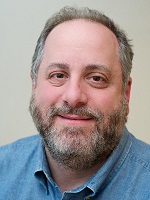 BRUCE: This puzzle had its origins at a dinner table conversation at the National Puzzlers' League annual convention last year. I repeated the joke and David counted letters in his head and announced that it could almost be split into four 15s. With an assist from Stanley Newman, sitting in between us, it fit exactly and David and I agreed to collaborate, with Stanley bowing out.

David filled the grid, I wrote a first pass on the clues and we bounced the clues back and forth until we reached consensus. One fun thing about collaborating is getting a different take on construction and cluing. Despite years of experience, as this was my first puzzle for the Times, David's perspective on "Thursday difficulty" was valuable.

Of my clues that survived editing, my favorite is "Way-out challenge?" I was glad Will kept my Thumbs-up and Thumbs-down clues but I wonder why he changed Cleveland to Toledo.

My favorite of David's clues is definitely "Female that sounds like you?"

I've been constructing puzzles for more than 20 years, founded the Microsoft Puzzlehunt in 1999, have served as an assistant editor of the National Puzzlers' League for the last ten years, and recently published my first puzzle book, Jumping to Conclusions, a book of hangman riddles available through Puzzazz. I'm currently working on a set of puzzles for June's Puzzled Pint.

The National Puzzlers' League convention is always a lot of fun, and last year was no exception! I was lucky enough to be sitting at a table with Bruce (aka Vroo) and Stan Newman (aka Famulus) when Bruce told the kleptomaniacs joke. I noticed that the original joke almost split into four 15-letter entries; if the wording could somehow be tweaked, the joke would be cruciverbal gold! Luckily, Stan came to the rescue by almost instantaneously coming up with a fix! Unfortunately, I remembered reading somewhere that no more than two constructors can be listed in a Times crossword byline. So Stan graciously bowed out of the collaboration.

The grid ended up being much more challenging to fill than I'd anticipated because the traditional grids with four 15-letter entries that I considered all had five-letter entries intersecting the first and last three letters of the middle theme entries. Since our theme entries had to be in a certain order, and the order happened to produce unfriendly letter patterns for those five-letter entries (such as K???C), I had to resort to a completely nontraditional pattern. My goal for the fill was to include as many lively entries as possible, as quote puzzles can get a bit dull otherwise, but at the same time to keep the short fill as clean as Stan would've wanted had he been a collaborator! So I kept the word count down to 74 and, after many hours, ended up with a grid that I felt had few trade-offs; Bruce was happy with it, too.

The cluing phase was the most interesting part of the collaborative process. Bruce made a Google spreadsheet with columns and columns of data about the total usage of each of our clues, whether they were similar to others in databases, etc. After many back-and-forths, we ended up with what I felt was an awesome set of clues! As always, though, Will and Joel elevated the clues from awesome to EPIC!

Overall, it was a pleasure collaborating with Bruce, and I look forward to seeing what ideas germinate at the next NPL convention. For now, both of us hope you enjoy the puzzle!