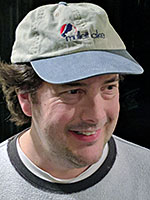 Finally! After five (or six?) submissions, I got Will's blessing. After just one, relatively straightforward, set of edits, it was ready to go.

The seed of this puzzle came from "turkey trot", as I was considering participating in the annual Detroit Thanksgiving 5k race by that name. I didn't end up running, but I did get a good puzzle idea out of it! Soon I was wracking my brain for similar "animal walk" phrases. "Bear crawl" and "frog march" all came pretty quickly, plus they were a crossword-friendly 9 letters to boot!

I knew I needed at least one more, or a revealer of some sort to put the puzzle into submission realm. I resorted to my old friend Google to search for animal phrases. "Goose step", also at 9 letters worked well, but frankly "Chicken Run" was my least favorite as it did not seem as "tight" as the others since it was not something "doable" by a human — like the others.

For my debut I was excited that Will used most of my fill, though probably less than half my clues. His cluing was certainly "fresher" than mine. I mean, "Raiders of the Lost __" ? That was just plain lazy. I love his replacement! After 35+ years of solving NYT puzzles, I am positively thrilled to finally join the club of constructors. One down, hopefully many more to go!