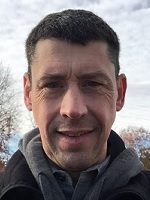 Happy Thanksgiving! I am honored and thrilled to have my first puzzle published in the New York Times. I want to thank Will Shortz, Joel Fagliano and David Steinberg for their feedback and patience, and especially for the great work they did editing this puzzle.

The idea for this puzzle came from my recollection of a 1980's Mad Magazine parody that referred to MTV as "Empty-V." I don't remember why I was thinking about that, but I made the connection between the "empty" rebus and Montana's two-letter postal abbreviation, and thought there could be a theme there. I've seen other crosswords that feature state abbreviations in various ways, but couldn't recall one that involved reading the letters as a rebus.

It's a pretty short list of states whose abbreviations can be used in this way, but it was not too hard to come up with possible theme entries. The challenge was coming up with entries that were consistent, made sense in English and did not repeat a letter in the abbreviation. The three entries that ended up the puzzle were none of my first choices, but they met these requirements. I like that each phrase ends with a four-letter word, even though that was not intentional.

The very first version had three grid-spanning entries and no revealer. As the theme entries were simplified, the space for a revealer was created. The first revealer was just POSTAL CODES, but I worried that could be confused with ZIP codes. Luckily, I had a five-letter central space that I could fit STATE into without too much trouble, and I felt that clarified it sufficiently.

I really love the way Will and his team re-wrote the clues to the theme entries. The ones I submitted were quite contrived and basically made the revealer unnecessary (I think I was still subconsciously resting the idea of a revealer). The re-written clues tie everything together and really make it a puzzle, so thanks again to that whole team!

I hope you all have a happy and safe Thanksgiving filled with ALL SMILES!