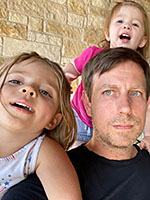 Despite the shorter theme entries, this puzzle was deceptively challenging to construct. Eight pairs of crossing answers with limited options (the U only had two) all in a set order is tough to build around. In fact, I couldn't fit everything in without going up to a 23x grid. So hopefully people enjoy it as there are 31 extra words to trudge through.

I never thought I'd debut any 3 letter entries, yet this puzzle somehow has two. Glad to see they both survived the final edits.

I normally don't enjoy themes with circled words spread throughout longer answers. Too often, they're just "hidden," with no justification for why the letters were broken up. So I wanted to try a theme that focused on the "chopping," and a secret recipe seemed like the obvious choice. I first considered mirepoix, but I was concerned it might not be widely known enough. I much prefer this, though, since it has a little twist for the final ingredient (my apologies for the sloppy knife cuts and snubbing of delicious cilantro).

This is a very dense theme with limited flexibility in layout, so it required a few glue-y bits to stitch together. I hope they don't sour anyone's solve too much, and I promise to never put EBOAT in another puzzle.

As always, thanks to the editing team for all their great work.

I'm thrilled to be back in the NYT with my first Sunday puzzle.

My initial submission had "Mystery Date?" as one of the theme clues and LIFE ON MARS as the answer for "Space Jam?", but there were concerns these might not be well-known enough. While I might give solvers more credit re Bowie songs, I suppose it's fair to assume not everyone recalls Ethan Hawke vehicles from 1991 that grossed $6M worldwide. It was for the best though, as this version is much improved.

While short-listing movies for theme potential, I noticed that a solid 20% of my options contained "man" (without even including compounds like "gentleman," "Englishman," "Superman," etc.). Out of curiosity I did a count of each unique word across a sample of 10k or so films, omitting articles, prepositions, and conjunctions. It should surprise no one that "man" was the most common word by far, almost doubling each of the runners-up ("night" and "love"). I obviously capped it at one.

I'll leave you with a few of my favorites that didn't make the cut:

Thanks, as always to the editing team for all their great work.

I know this mash-up/double feature gimmick has been done before (for both movies and musicals), but I've only ever seen it result in zany themers. I was curious if I could find examples that were valid in-the-language phrases, and, luckily enough, there were just enough for a solid theme set. The one entry I loved that didn't make the cut was ZODIAC SIGNS, but without a title the revealer took precedence for that final slot.

My first submission had MOONSHINE in the center (a tad inconsistent), two bonus down themers (HOLES UP and HEAT RAY), and more three-letter words than I thought was possible in a 15x grid. Many thanks to Sam for his help and patience through a couple of revisions. I hope you enjoy!

This was a fun puzzle to write. I like the playful twist that comes when you get to 42A. If only May the 4th fell on a Wednesday this year…

As a solver, I don't enjoy cross-referenced clues. If I stumble on a "See X-Across" I'm more likely just to skip it than to jump elsewhere in the grid. So this puzzle was my attempt to take something I don't typically like about crosswords and turn it into something fun. If you agree, I hope this puzzle is redeemed by not having the dangling second halves for those clues.

Shout-out to my wife and test solver, Brooke, who suggested running the sequence along the border when I was first brainstorming this theme.

My original submission obfuscated the theme more as their clues were simply "PETER RABBIT," etc. I liked the solver having to work more for the aha moment, but that might have been a bit too cerebral. Overall, I think Will's edits work well.

I had a decent list of potential theme options, but it was pared down a good deal when I added the constraint that the clues had to be two separate words (and no hyphens). For example, I could use BLOOD MOON to clue "LINE DANCE" but not BLOODLINE to clue "MOONDANCE."

Glad to see my favorite clue made the final cut (4-Across).

Thanks to Will and team, and I hope you enjoy!

I'm very excited for my NYT debut. I was an Economics major at the University of Chicago and now spend my days at an ad agency in Austin, TX. I've been solving the Times crossword off and on since college, but with increased vigor since becoming a dad earlier this year. My new schedule comes with a good deal more at-home hours, and I've filled some of that newfound surplus trying out crossword construction.

I had been toying with this theme idea for a while, keeping a running list of potential theme answers on my phone. I liked the idea of cluing the flipped form instead, because, in addition to the solving curveball, it allows you to showcase both versions without having to dedicate double the grid real estate. This allowed me to include nine examples of themed wordplay (plus a revealer) rather than just three or four.

The most challenging part was achieving the interlock in all four quadrants, given a relatively short list of options in my theme bank. MANCAVE and PACKRAT each span two other theme entries which put some strain on the fill in those sections. But those were two of my favorites, so I went for the higher theme density, and I think the final version worked out well.

Oddly, the example that first gave me the idea (JACKBLACK/BLACKJACK) didn't make the final version. I had it in the northwest but was having trouble filling the surrounding area satisfactorily. Other near misses for various reasons include KINGFISHER, ARMSTRONG, and SHOWBOAT.