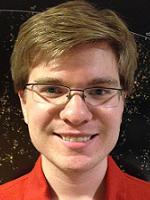 In case it isn't obvious, this puzzle's seed was Goldilocks zone. I'm more than a little biased as an astrophysicist, but I really like how it captures science creating new words. We have only been able to find exoplanets at all for about two decades, and we are only just now beginning to discover distant worlds that may support life by having liquid water on their surface. To do so, planets have to be just the right distance from their parent star so they're not too hot or not too cold. Hence, Goldilocks zone.

(I actually study interstellar dust grains, so not exoplanets directly. However, those dust grains are what coagulate in protoplanetary disks to eventually form planets! I spend my time thinking about how those little dust grains affect light coming from distant parts of our Galaxy or even other galaxies, as well as the light emitted by those dust grains themselves.)

This puzzle started out as a 68-worder with the northeast and southwest as you see them today. Despite being a bit closed off from the rest of the puzzle, the remaining two corners were very uncooperative. Eventually I broke up two crossing sevens in each corner into two pairs of threes, upping my word count to 72 and my three letter word count from 12 to 20. However, this allowed me to get in "locavore" and "Buzzfeed" without much strain. Worth it? Hope so.

I really dislike the sexist overtones in cluing "goddess" as "bombshell" and was disappointed to realize it was in fact one of the two clues I submitted (the other being a straight mythology clue). Ugh, sorry about that. If I were to redo the puzzle, I'd also pass on the entry "go crazy," colloquial as it may be. Language matters.

I am very proud of my clue "Butt end?" for "tees" (spelled out letter; haters gonna hate) and like the somewhat kooky LL and OO beginnings of the first two downs. I wish I could take credit for the brilliant "Casting director?" clue, but that goes to Will and Joel. I hope you found things you liked, too!

I am very happy to be debuting my first themeless today! Being a themeless neophyte, I worked with just the single seed ALBUS DUMBLEDORE and let the subsequent fill take me wherever it wanted to go.

I spent a long time writing the clues for this puzzle, so I'm happy to see many of my favorites — THETA, DECK, BROMANCE, T-BALL, CIGS (though brilliantly edited to sync up with KIX), and CLEESE — make the cut. I was sad to see my more devious "Vessel of the 'Odyssey'?" for EPIC VERSE, "They call for a change of address" for PHDS, and "Subject of a noted 2007 outing" for ALBUS DUMBLEDORE get altered, but so it goes. I particularly liked the new clues for SEA ICE, RINGO, SLEEPS, and POTUS (which of course post-dates my submission!).

Since writing this puzzle, I've tried to be more careful about words that are almost always clued as part of a common phrase, e.g. POLI and RUSSE. I tried to save the former with the clue "Greek cities" and the latter with "French Russian," but no dice.

I hope that you enjoyed this first effort, and I'd be eager and grateful for any feedback.

ADDED NOTE: I completely agree with Jeff about SEX KITTEN. I would certainly not use that entry (or anything else of its ilk) in a puzzle today, and am sorry that I chose to a year or so ago when I made this puzzle.

Aside from thinking about other-worldly things on a daily basis as an astrophysicist, this puzzle started by noting how good of a revealer SPACE INVADERS would be. The ET rebus idea came immediately afterwards, and I thought about making a little "Space Invaders" alien from the ET squares. That didn't work so well, so then I tried making a UFO, which turned out much better. However, all of my theme real estate was in the middle of the grid — I needed something else. When the COW idea hit me, I changed SPACE INVADERS to ALIEN ABDUCTION and was off to the races.

Having the revealer at the top of the puzzle helped my theme material span the whole grid, while putting it through the middle or at the bottom made for really tough construction. This of course ran the risk of giving away the theme too early, so I made the clues in the Northwest as tough as I could. As for the rest of the grid, having immovable ETs everywhere proved best accommodated by amping up the black square count. Hopefully I struck the right balance between having too many short words and having a junky grid. I was particularly pleased to work two rebus squares into ETICKET.

I feel that so much of this puzzle hinges on the COW square, and was happy that Will preserved my approach not to indicate its presence in any way but rather let it be discovered as the final touch to the theme. He did add the fantastic descriptor "an eerie rural legend" to my original 1-Across clue, which motivates it a little more.

This puzzle is my first (but hopefully not last!) in the NYT. I'm still a little surprised this screwball of a puzzle was accepted, but am thrilled to have the opportunity to share it.