Fun Halloween theme, famous people "in costume." I dug the image of BUSTER KEATON in his porkpie hat … and proton pack! Also amusing to visualize Wolf Blitzer doing the "Werewolf Bar Mitzvah." EYE OF NEWT GINGRICH stuck out a little since it was the only themer with two words appended to the person, but it was a funny enough answer that I didn't mind. Six solid themers. 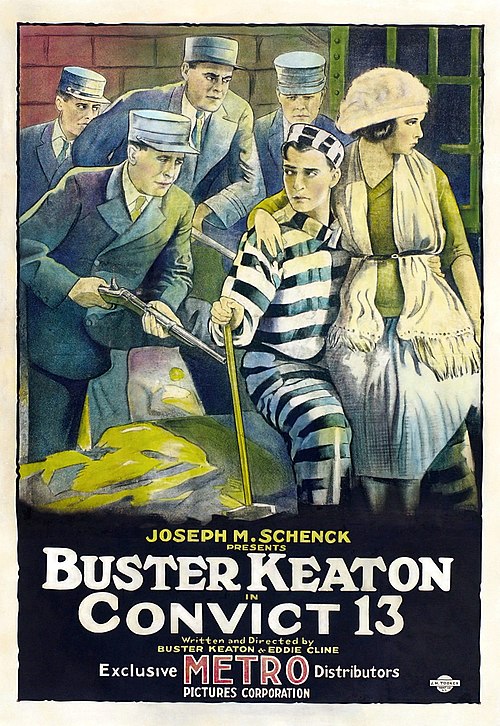 Bill's long fill worked well for me, too. I tend to get a little bored doing a 21x21 puzzle, so uncovering juicy fill is a real treat. LAST TO LEAVE was really fun — so amusing to think about that last clueless guy who doesn't know he's supposed to git. LAID AN EGG, SALT MINE, GOOD GAME, even CERTITUDE are all colorful entries. It's not often that we get so much good long fill in a Sunday puzzle.

As with most anything good, there is a price to pay. I hitched several times when solving Bill's mid-length stuff. I did like looking up COZENER, PITMEN, and TINHORN, but I scratched my head at these during the solve. A little cocking of one's head in confusion is fine, but it can easily get to be too much for me.

And the short fill — if you choose to include a lot of long entries, it often comes at the price of a lot of super-short stuff. The usual minor gluey bits like ETE and ESTA and TO A are negligible. Adding UP TO right over TO A, the awkward plural LOLAS, ILL GOT(TEN?), and the hard-for-me-to-process CMD (command) crossing GUCK (not GUNK?), the ancient Hebrew measure HIN …

Generally, you need some minor gluey bits to hold a 140-word Sunday puzzle together. I personally find it's best when you stick to the lesser offenders and steer clear away from the Maleskan-era ones.

A very fun Halloween theme, with some hiccups in execution. Going up to 142 words, or breaking up some of those nice long pieces of fill, would have been a better trade-off for me.