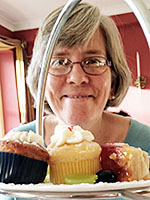 This is my first rebus puzzle. It got its start when I thought of BREAK BREAD and JUNK DRAWER together, with that fairly uncommon KD string. I didn't think I had seen this as a reason for a rebus before. I couldn't get JUNK DRAWER to work, so thank goodness socks also have a drawer.

When the editing team asked me to replace one entry, I reached out to Jeff in my quest to make sure I was looking at all the possible replacements. In our conversation, he pointed to one of Matt Ginsberg's, but that's a Schrödinger puzzle, so that's not quite the same mechanism.

I tried to confine the possibilities to phrases that were not sing-song or rhyming, so it was more of a surprise that the two halves of the phrase were only one letter apart. I also didn't want to use entries where one of the words could have the same clue as the whole phrase (sorry, Galileo Galilei). Because the theme answers appeared short, I worked to get more long down entries into the grid.

My favorite kind of flip-flop is not in this puzzle. For anyone who has not taken a computer electronics course, a flip-flop is the smallest unit of storage in a computer system, storing whether a single bit is 0 or 1. Flip-flop is a fun word, unlike much of the vocabulary in my day-job field of engineering. So, I admit it: I thought of this theme idea while I was at work.

My original thought was to put the FLIP entries and the FLOP entries on the same row of the puzzle, so the FLIP and FLOP clues would be adjacent. That would have required me to define the FLIP/FLOP words in 7 letters, which I couldn't figure out how to do. In my original submission, I had one of the FLOPs defined as SLUMP DOWN. The editing team asked me to change it to PLUNK DOWN. I appreciate the editing team's work. They kept all the clues I liked and added some new ones that I really like.

I'm pleased to have my next puzzle appear in the New York Times. I don't think it will ever cease to be a thrill. I submitted this puzzle in May 2020, when New York was locked down, and postal mail was delayed (this was my last submission by postal mail a couple of weeks before electronic submissions were accepted).

I'm writing this just after my husband and I return home from our long-awaited weekend visiting our now-vaccinated adult sons and their friends. What a year it's been. My original clues were made a bit easier for publication. Thanks to my dad for test solving the hard version (he told me it was hard). My favorite clue that didn't make it was for 48-Down: Like many backseat drivers' comments.

I'm pleased to be back in the New York Times. This theme came to mind when I was looking over a medical bill, and the phrase OUT OF POCKET jumped out at me. Despite the theme, I'm a terrible pool player.

I believe this is the first (and one of the only) puzzles I've made with the theme entries in a pinwheel. I don't remember why I did that, but looking at it almost a year later, I can see how it made it easier to fit the five theme entries, including the short one in the middle. While I like having other longish entries, I'm afraid they make it harder to see the theme.

In non-theme fill, I'm pleased to bring KYIV to the NYT crossword, and I'm proud to debut a non-theme word that's not on Jeff's list. When Kyiv and Ukraine were in the news early last year, I noted the interesting spelling and added it to my word list. It wasn't until it fit into this puzzle that I looked more into it and realized that the Ukrainian government had been actively trying to get newspapers and governments to change their usage from the Russian transliteration of Kiev to the Ukrainian transliteration of Kyiv. They started a campaign complete with the hashtag #KYIVNOTKIEV to bring attention to it. The New York Times and other newspapers changed their style sheets to use Kyiv in 2019.

I'm very pleased to have my next puzzle in the New York Times. This theme came to mind after my husband and I took a vacation to England in fall of 2019. In fact, my constructor photo was taken during high tea in Bath, England.

I had a lot of fun coming up with the theme entries, both alone, and with Will and the editorial team. A couple I liked that didn't make it into the final product:

I look forward to when we can safely travel again, across the ocean, or even across state lines.

I'm thrilled to have my first Sunday puzzle in the New York Times. I started working on theme entries for this puzzle several months before I had the confidence to make the puzzle. Filling my first 21x21 grid, which this theme requires, was kind of intimidating. Thanks to the editorial team for keeping my best clues, and for coming up with others I wish I had thought of.

I don't remember how I initially came up with the idea for this puzzle. During a recent visit by my mother-in-law, however, I came up with a guess for how it probably happened.

My mother-in-law is an accomplished woman. She speaks several languages fluently, she taught Asian languages for many years in New York City public schools, she has worked at the UN and at Berlitz language schools, she published a Chinese cookbook, and she raised three successful children. For several years now, she has suffered from Alzheimer's Disease, a heartbreaking illness. My husband heard about Alive Inside, an award-winning documentary showing that many people with advanced dementia respond to music in an exciting way. He made a playlist of songs that my mother-in-law knew in her younger days; we found that the music helps her, so she hears the songs every day.

When she visits us, I hear the songs on the playlist multiple times. The first song on the playlist, the one we hear the most often, is a certain song from The Sound of Music. So I'd like to give my mother-in-law (and Julie Andrews) credit for sparking the idea that led to this puzzle.

I'm pleased to have my second puzzle in the New York Times. It's being published just two months after acceptance, leapfrogging another puzzle of mine that's in the queue.

This theme came together fairly easily. I don't even remember which theme entry came to me first, because I thought of all four at about the same time, and I couldn't think of any good options beyond the four. It was good I had some leeway on phrasing and verbs, which allowed me to equalize the lengths of the phrases.

I was surprised when Will said he would publish this on Thursday. I expected this to be earlier in the week. Thanks to the editing team for their work in adding more deviousness to my clues.

I wrote this puzzle last November, during a different time, when we took going to work for granted. A lot has changed. I'm now in my third month of working from home. My thoughts go out to all who have been working on the front lines, to those whose jobs have gone away, and to those who are just starting back to in-person work as businesses are opening again.

I'm thrilled to be making my debut in the New York Times, especially on Thursday, my favorite puzzle day. I have been a word puzzle fan and occasional crossword solver for as long as I can remember. Four years ago, when my sons gave me a New York Times crossword subscription as a gift, I got hooked and started solving it daily. (My streak is 1,469 days as I write this.) At some point, I started reading XWord Info and enjoyed the inside look at the process of crossword construction. I decided to try my hand at creating crosswords about a year ago, and I'm really enjoying my new hobby. During the day, I work as an engineer.

This puzzle was even more of a family affair than most of my puzzles. One day, my husband made a joke about ‘wife' and ‘Wi-Fi'. I got the far-off look in my eyes he's come to know. Later that day, I mentioned my theme idea to one of my sons, who was home for a visit. Over the next couple of hours, he came up with bow tie, Versailles, and Sinai. When I thought of ROCKS THE BOWTIE, my favorite theme answer, I knew I had to make the puzzle. To add to the family connection, my father was a valuable test solver.

I submitted this puzzle in June, and it was accepted in September. I'm pleased that Will Shortz and the team kept a good number of my clues. I also want to recognize the contribution of the crossword community. I've gotten feedback and encouragement from crossword editors for several other venues that have helped me to improve my skills. I'd also like to put in a plug for the Crossword Puzzle Collaboration Directory on Facebook.