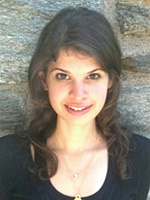 In the past nine months I've worked as Will Shortz's assistant. One of the job's perks is getting to discuss theme ideas with Will, often over lunch. Will sanctioned this puzzle — whose theme is a pun on a symbol (#), as opposed to a word — in February.

I still construct by hand, so this 72-word grid took many late nights to fill cleanly. So many nights, actually, that I may finally be convinced to construct using software. It's a long time coming: when I learned in January that Bernice Gordon, the Times' only centenarian cruciverbalist, uses software, my graph paper and pencil technique seemed not so much retro as retrograde.

Ultimately, though, I'm happy with this puzzle's fill (with the exception of a couple unfortunate partial phrases). The only word that gave Will real pause was SHTUP, which he and I debated at length. I suggested that if Rachel Maddow can say it on msnbc, and my dad can say it at Passover, it had evolved beyond its crude Yiddish origins (from the German stopfen "to stuff"). Here's hoping most solvers agree.

I so regret leaving Will next month, but I'm giddy to start graduate school in English and film studies in the fall. It's been a total joy working with him — from fact-checking to cluing to debating the vulgarity of SHTUP. #dreamjob #thanksWill