24 puzzles by Andy Kravis
with Will Shortz comments 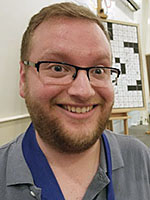 Andy Kravis, of Brooklyn, joined The Times as an associate puzzle editor in April. A 2013 graduate of Columbia Law School, he previously worked as a Transgender Rights Project Legal Fellow for the L.G.B.T. rights organization Lambda Legal, before turning to puzzles full-time.

In addition to the theme, Andy tried to include as many fresh answers in the grid as possible — including 1A, 104A, 4D, and 82D, none of which have ever appeared in a Times crossword before.

A fresh theme, elegantly done. DATEBOOKS did give me pause, because I'm just barely familiar with the usage of "book" meaning "to leave" — but it's legitimate. You might be interested to know that the constructors' manuscript had F-BOMB at 1A, which I edited out. It was a close call, but I wasn't sure this met the Times's standards of good taste.