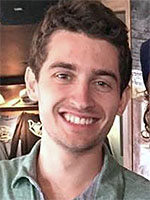 One of the first theme answers we thought of was 16-letters, so you'll notice that the grid is not square today (16x15). Given that we didn't have any other theme answers that long, we realized two things: 1) we needed five theme answers (the longest across the entire middle row, two above, two below) and 2) the revealer was going to be tricky to place. We placed our five symmetrical themers fairly quickly, but struggled with the revealer, even debating whether or not to split it between two answers with cross-referenced clues. Finally, Yacob came up with a heroic solution and found a Down answer where our revealer could cross 3 of the Across theme answers, et voila! We had all of the thematic material placed, and the rest of the grid fell into place.

RYAN: Alan and I met in college where we sang in several groups together, notably in our a cappella group the Princeton Nassoons. He was actually the person who first got me interested in crossword puzzles! After graduating we decided it would be fun to collaborate and create a puzzle together.

Alan came up with the theme idea for this one, and we worked together to manually fill the grid and create clues. Based on the theme, we had clued this around Tuesday/Wednesday difficulty, though the NYT team accepted it for a Thursday and many of the clues were adjusted to be more challenging.

Looking back it would have been nice to get a couple juicier longer down answers in the NE and SW, and perhaps some better short fill, although I liked how they used some atypical clues for a few (ONO, ERE, ANO). Nevertheless, the puzzle was fun to make together, and I hope you enjoy it!

ALAN: Very excited to be my making my NYT Crossword debut today! A bit about me: I'm a 25-year-old energy market consultant/singer-songwriter/marathoner living in New York City. I found my way into the crossword community through a lifelong love of word games and puzzles (I grew up playing Scrabble and Boggle with my mom and solving Sudoku and Ken Ken before bed) but didn't really get into crosswords until college, where I met my collaborator, Ryan McCarty. Ryan and I were members of the Princeton University Glee Club and the Princeton Nassoons, the university's oldest a cappella group, before beginning our crossword collaboration.

For today's puzzle, I started writing down crossword theme ideas in the "Notes" app on my phone during my commutes to work in 2015. Many of the early concepts I came up with revolved around phrases that lent themselves to literal interpretations involving a letter addition or removal ("DROP THE F" BOMB luckily never came to fruition…).

But then NO WAY came to me and I realized dropping an entire word might result in some fresher "wacky" phrases. RUN A TRAIN was the first potential theme answer that I thought of, and with Ryan's expert grid construction skills and some more theme answer brainstorming, I knew we were on the right track, so to speak.

Side note: as a runner, I was excited to use "Marathon leader?" as the clue for ULTRA, but I wasn't sure if the Ultramarathon reference was too obscure for the general public. After a quick Google search eased my initial worries, I noticed the following blurb in the Wikipedia article for Ultramarathon:

Since 1997, runners have been competing in the Self-Transcendence 3100 Mile Race, which is billed as the longest official footrace in the world. They run 100 laps a day for up to 50 days around a single block in Queens, NY, for a total distance of 3,100 miles (5,000 km)

This absurd race has been the topic of many conversations since finding out about it during my crossword research. Just thinking about the fact that Suprabha Beckjord ran the race 14 times (i.e., she spent over two years of her life running around a high school in Queens) makes my legs hurt...