253 puzzles by A. J. Santora
with David Steinberg comments 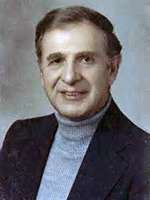 See the 339 answer words debuted by A. J. Santora.

185 pre-Shortz crosswords by A. J. Santora

In 33-Down clue, "O'Keeffe" should have been "O'Keefe"; left as in the original.

Clue for 19-Down was missing in the original, so put one in; it's probably not what the constructor originally wrote.

In 81-Down clue, reference is likely to Kiri Te Kanawa, not another soprano Natalia Kawana — this is probably an error; left as in original.

The grid position 97 is labeled 970, making the answer to 970 Down MISNUMBER.

Original had first line of 45-Down "Asian flower" clue duplicated after 73-Down; corrected this so the clues correctly match the grid.

Possible NYT factual error. A solver notes that Cabot was part of a "Company of Merchant Adventurers," but it wasn't that one. Cabot was born in 1474 and died in 1557. There was a "Company of Merchant Adventurers of London," which was founded in 1407. Starting in 1689, that company was informally referred to as the "Hamburg Company." Unclear how Cabot could have had any connection to that organization. Left clue as in the original, however.