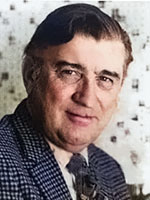 Eugene T. Maleska was the New York Times Crossword Puzzle Editor from Feb 28, 1977 (when Will Weng retired) until his death in 1993. He was succeeded by Will Shortz. Records are uncertain during his time, but he probably authored more NYT crosswords than any other constructor.

Clue for 49-Across appears to have an acute accent over the "e" in "Re"; left it as in the original.

Clue for 9-Down is as it appeared, but "millenium" should have been spelled "millennium."

The following note originally appeared under the byline:

(Featuring a quotation reading diagonally, top-left to bottom-right, from Longfellow's "A Psalm of Life.")

When this puzzle ran, Hawaii had been a state for nearly 3 years, so the 64-Across clue is erroneous.