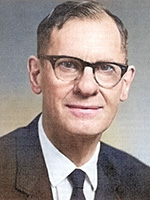 From Wikipedia: Will Weng (February 25, 1907 — May 2, 1993) was an American journalist and crossword puzzle constructor who served as crossword puzzle editor for New York Times from 1969–1977.

Born in Terre Haute, Indiana, he attended Indiana State Teachers College. Weng came to New York City in 1927. He got a master's degree from the Columbia University School of Journalism and joined the Times in 1930 as a reporter. He served as a Lieutenant commander in the United States Navy during World War II.

Weng had succeeded Margaret Farrar as crossword puzzle editor, and was himself succeeded by Eugene T. Maleska. After leaving the New York Times, he became the editor for a start-up crossword puzzle venue called The Crosswords Club, preparing five Sunday-size crosswords every month for distribution to subscribers.